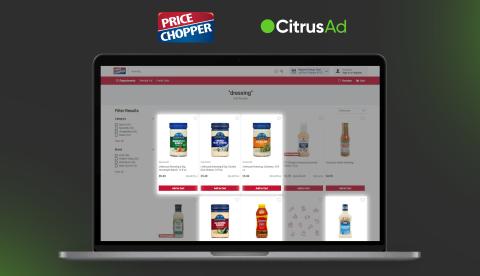 In a bid to compete with behemoths like Amazon, more than 25,000 retail stores have teamed up with CitrusAd to provide a scalable self-serve advertising platform that enables brands to develop targeted campaigns across an entire network of omnichannel retailers nationwide.

"Our stores are continuously trying to engage with customers on a more personal level, with CitrusAd’s platform increasing ad relevancy we are able to connect our customers to brands on a more personal and convenient level,” said Casie Broker, chief marketing officer at Price Chopper, in a recent media release. "This enhances both the overall experience and lets our customers find new and old favorites in one place.”

“As third-party cookies will no longer be supported by Google, Safari and Firefox in 2022, online savvy retailers like Price Chopper integrate with CitrusAd to offer the perfect opportunity for brands to utilize the retailer’s first-party data to connect with shoppers in a relevant, unobtrusive manner at the point-of-sale,” said Brian DeCoveny, vice president of retail media partnerships for CitrusAd, in the release.

Retail media has exploded in popularity over the past few years, with major brands expanding their digital presences on top retailers’ platforms. Advertising in retail media is expected to double over the next five years from the $30 billion being spent in the space today, according to Retail Leader.