Editor’s Note: In each issue of Path to Purchase IQ, we’ll showcase a curated roundup of consumer research studies and other insights that paint a picture of emerging trends in shopper behavior in this department, called The New Consumer.

This month’s installment offers a glimpse into the COVID-19 pandemic’s latest effects on consumer behavior, sustainable product purchasing trends and the trajectory of the cannabis market.

With inflation continuing to harshly impact U.S. consumers, recent insights from Kroger data analytics subsidiary 84.51 and its “February Consumer Digest” delved into how consumers are fighting inflation and the latest shopper trends and behavioral analytics.

The report pointed out that COVID-19 concern trended downward among shoppers as cases began to decline. In February, 68% of shoppers said they were very concerned with inflation. Of those shoppers:

• 56% have been looking for sales and promotions
more often;

If there was a need to cut back, 57% said they would cut out adult beverages, 56% would cut snacks and 46% would eliminate beauty items. However, while 56% said they have been cutting back on non-essentials like snacks and candy, the actual shopper behavior shows that units sold are flat and shoppers are still snacking. Overall, however, only 22% of consumers responded that they feel comfortable with their current financial state.

In terms of meal planning, consumers are looking for “speed and simplicity.” Many said they search for cooking inspiration. Thirty-five percent said they use Google, 33% use store ads, 21% use online sites such as Pinterest and 14% use apps on their phones. 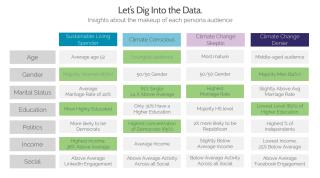 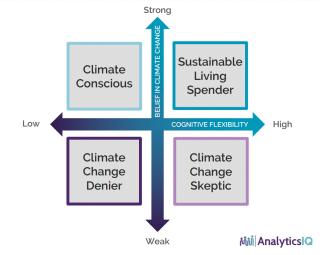 Although many consumers indicate that they are invested in protecting the environment, the majority actually overestimate their level of dedication and their willingness or ability to spend more on sustainable products, according to AnalyticsIQ’s green personas product sheet and detailed data.

Sustainable living spenders score highly on both their belief in climate change and cognitive flexibility, making them the most green-motivated consumers and the ideal target for brand marketers of environmentally friendly products and services. Most consumers who fall under this persona are:

• Highly educated and have an annual household income that’s 37% higher than average.

Some other key findings from the report include:

• Green, sustainable products and services are on their way to becoming a trillion-dollar market.

• Nearly three quarters (75%) of consumers said they prefer eco-friendly brands, but 60% are unwilling to pay more money for that green product.

• Nearly 75% of overall consumers said they prefer eco-friendly brands, and green shoppers in particular spend 23% more on discretionary items than average each year.

BDSA, a market research firm focused on the legal cannabis market, kicked off March by releasing its latest forecast with cannabis sales data for the U.S., Canada and global markets. For 2022, global cannabis sales were projected to reach over $35 billion, a jump of roughly 22% compared to 2021 sales, which totaled $29 billion, according to BDSA’s most recent five-year rolling market forecast update. BDSA also predicts that by 2026, that number will surpass $61 billion, a compound annual growth rate (CAGR) of more than 16%.

“Though most legal cannabis markets saw sales soften in the second half of 2021, the global cannabis market is expected to see brisk growth in 2022, driven by strong sales in new and emerging markets in the U.S., steady growth in Canada and international markets lead by Mexico and Germany,” said Jessica Lukas, chief commercial officer at BDSA, in a March news release.

Some key predictions from the forecast included:

• California, which launched its adult-use market in 2018, will remain the largest contributor to overall U.S. sales growth, with the next top four contributors to growth being New York, New Jersey, Florida and Michigan by 2026.

• The majority of growth in Canada is expected to come from Ontario, growing over $1.3 billion by 2026. British Columbia will also be a leading contributor, adding $420 million to total sales by 2026.

In 2021, new markets in the U.S. experienced some of the strongest growth, particularly in the Midwest. Illinois sales grew approximately 70% in 2021, totaling $1.8 billion, after the state legalized recreational cannabis in June 2019. Missouri’s medical-only market reached a high of $210 million.

Emerging markets are also expected to be a major driver of sales through 2026 as the number of non-legal states dwindles. The research firm says the pace of legalization could even increase as the latest wave of medical and adult-use bills are seeing positive bipartisan support at the state level.