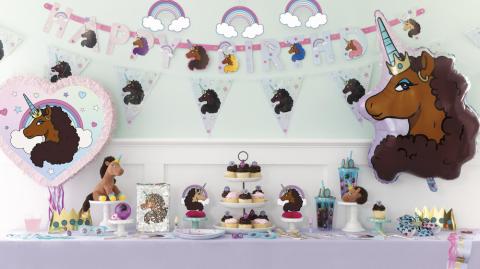 After facing some online scrutiny for a Juneteenth-themed private-label ice cream flavor, now pulled from stores, the retailer has partnered with a Black-owned brand.

Afro Unicorn, a digital-native brand of unicorns for women of color, has launched a curated assortment of its party supplies and favors product line at Walmart. The new line of more than 20 exclusive products joins the retailer's roster of “celebrations” brands in over 1,500 stores across the U.S. and on Walmart.com. With this launch, April Showers, the founder and CEO of Afro Unicorn, becomes one of the first Black female-owned businesses to enter Walmart's celebrations party category.

The unicorn features an afro-style mane and comes in a range of Black shades including vanilla, caramel and mocha. Showers said in the release that it was important for the unicorn to come in more than one shade to mirror the array of Black complexions of her customers.

"Afro Unicorn is more than a line of products,” Showers said. “It's a movement to make sure Black people are represented and have a seat at the table. I'm grateful Walmart understands how important this is and gave me that seat at the table. Now, millions of little girls will grow up with products on store shelves that represent and celebrate them."

Afro Unicorn launched in 2019 as a direct-to-consumer e-commerce business. The partnership with Walmart marks the lifestyle brand’s first move into physical retail. The products are available in store shelves nationwide and in Puerto Rico next to children's brands in the party. Afro Unicorn will expand into apparel at more than 3,800 Walmart stores in June 2022 with the launch of two styles of leggings and shirts for girls. The brand has additional category launches at Walmart, including holiday, planned for later in the year. Showers has also signed multiple licensing deals, according to a news release.

Showers credits her dedicated online community for getting Walmart’s attention after a video featuring a 4-year-old girl wearing an Afro Unicorn t-shirt went viral. The video was shared by numerous celebrities, including Oprah, Viola Davis and Tina Knowles and then caught the eye of a Walmart associate, according to the release. That inspired the Walmart merchant to reach out to Showers about a possible collaboration with the retail giant.