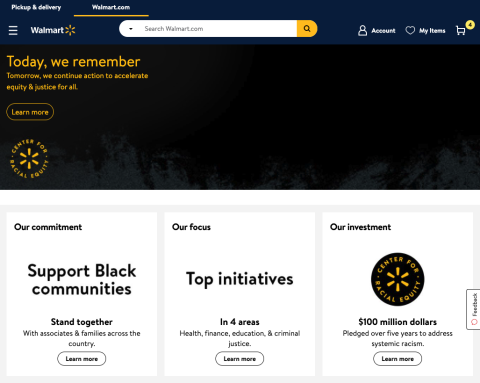 Exactly one year after the May 25, 2020, killing of George Floyd, a Black man who died after a Minneapolis police officer pressed his knee onto his neck, consumers visiting walmart.com encountered a home page blackout as the retailer gave over its top-of-page carousel and three supporting ad units to acknowledge the anniversary with a message to consumers: “Today, we remember. Tomorrow, we continue action to accelerate equity & justice for all.”

Floyd’s murder — police officer Derek Chauvin was convicted in April — led to nationwide protests over racism and a resounding demand for action from government institutions and corporations alike. Retailers were most certainly included, and many made key changes in hiring, sourcing and marketing practices that will influence retail culture for years to come.

“When we think about driving social change, retailers matter because they cast models and write stories. We have to be really intentional about how we use that power to promote progress,” Walmart’s associate director of marketing operations on diversity, equity and inclusion, Carol Vella, told the Path to Purchase Institute. Vella occupies a newly created role at Walmart, leading the marketing side of Walmart’s diversity efforts, with 60% of her job focused on Walmart’s external presence and 40% focused on internal practices within the company. Her position illustrates the duality of retailers’ commitments to racial diversity: in their outward marketing communications and in their internal operational policies.

Sourcing and spotlighting more products from Black-owned companies is one example of how retailers overhauled their practices to respond to the changing demands of the marketplace. Target, for example, has set a goal to spend $2 billion on Black-owned businesses by the end of 2025. For its part, Walmart has committed $100 million over five years to create a new center for racial equity, mostly focused on increasing African American representation internally, but spanning beyond that, as well. Unlike temporary donation efforts, these types of changes — even if the monetary commitment in many cases is a mere fraction of companies’ total income and executives’ total pay —  require more active and accountable activity that will continue over time.

It would have been unlikely to see mainstream retailers making such commitments before summer 2020, chief media officer at Decoded Advertising, Nakia Clements, told the Institute. She has noticed a big change in the way retailers address racial equity. According to her, marketing has become about being on the right side of history, and businesses can’t afford to embrace the middle ground anymore.

“You can no longer claim ignorance. Everybody needs to be accountable,” Clements says.

Yet not all efforts come from a genuine place of fostering diversity, Jamika Martin, founder of Rosen Skincare, a Black-owned brand that collaborates with Target, told the Institute. Since last summer, Martin has been approached by a large number of retailers looking to work with her company. “It felt like just a Band-Aid fix of immediately sourcing new Black-owned brands with no real bones for sustainability,” Martin says. Her company’s relationship with Target, however, dates back to 2018, and Martin has become a founder in their ecosystem of diversity and inclusion. Target stands apart for her as a retailer that actively includes more people of color in its decision-making process, not just the image that the company projects into the marketplace.

Yet the percentage of executives of color in retail has hardly changed since 2010, according to Retail Dive. In order to build bones for sustainability, Vella says the key to intersecting diversity, equity and inclusion is to include people from different demographics at the decision-making level. This is important whether it is on an internal board or on a marketing team because it allows retailers to think more broadly, without getting too narrowly focused on audience-specific trends. Looking around and knowing that people from all walks of life are represented in powerful positions help guide decisions that push for progress, without alienating anyone who might be interested in becoming a customer.

Mabel Frias, a co-founder of Luna Magic, an Afro-Latina indie beauty and lifestyle brand that collaborates with Walmart, told the Institute that “customers are activists.” People care about where and why they shop. Conversations surrounding racial awareness have existed for years, especially amongst people of color, but the events in the last year brought these topics to the surface in the way that they relate to everyone.

Path to Purchase Institute members can browse examples of social justice at retail in the Activation Gallery: Signs of Change as well as other related articles, images and related updates on p2pi.org.