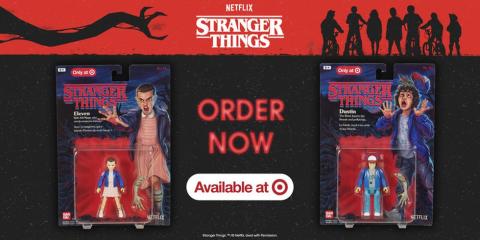 Target is tying into the excitement building for the upcoming release of Netflix’s fourth and final season of popular 80s-themed science-fiction series Stranger Things, set to release in 2022. The retail giant is shining a spotlight on licensed Stranger Things merchandise including new and exclusive 4-inch figurines of fan-favorite characters Eleven and Dustin from toymaker Bandai America.

The two exclusive Target figurines are part of a larger Bandai line of figurines resembling more of the show’s characters, including Hawkin’s police officer Hopper and the Demogorgon monsters from the fictitious “Upside Down,” available on the manufacturer's website and at other retailers. Each Netflix-licensed figure comes in 80s-themed retro packaging with a nostalgic blister card and one collectible “build-up” Demogorgon part.

The product rollout at Target also precedes Netflix’s Nov. 6 designation as “Stranger Things Day,” a holiday made up by fans to commemorate the date character Will Beyers went missing from Hawkins, IN, in 1983.

"Stranger Things is a show that has managed to tap into the heart of everyone's inner child, which makes the opportunity to bring the characters to figure form incredibly exciting and rewarding," said Cisco Maldonado, senior director of brand strategy, Bandai America, in a recent media release. "We are thrilled with how well these figures replicate these iconic characters and can't wait to get them into fans' hands."

This isn't the first time Target has worked with Netflix to promote Stranger Things merch. In 2019, ahead of the third season premiere, the mass merchant shined a spotlight on licensed products spanning categories ranging from apparel to toys and frozen ice cream to pool floats. Stranger Things exclusives from Funko's Pop! and Dorel Industries also hit Target stores and website. Plus, Target teams worked closely with Netflix to create exclusive custom-branded packaging for products across the retailer's assortment, including licensed, limited-timed ice cream pints from Baskin Robbins in flavors including "U.S.S. Butterscotch," and "Praline Portal."