In the U.S., medical marijuana is currently legal in 23 states and the District of Columbia. Adult recreational use is also permitted in Oregon, Washington and Colorado. This year, an additional seven states are considering whether to adopt ballot measures that would allow adult use. Among those, Vermont is the only state that is considering taking legislative action.

In 2014, two years after marijuana was declared legal for recreational adult use in Colorado, there were already some 200 licensed cannabis operators in the Centennial State. The running joke was: “Colorado has more marijuana dispensaries than Starbucks stores.”

Today, the Starbucks reference is no laughing matter. As the barriers to legalized marijuana continue to fall in several U.S. states, operators of cannabis retail stores and medical marijuana dispensaries are seizing upon a major rebranding opportunity – with input from top CPG executives – to change consumer perceptions of the product.

For now, the idea that these retailers will evolve into Starbucks-style lounges is a nonstarter; even the states that have legalized recreational marijuana usage ban consumption in public. Nevertheless, a handful of players in the category have broken the traditional mold of dreary mom-and-pop stores and clinical dispensaries. Their sleek, sophisticated new designs are creating a more welcoming environment, one that attempts to peel away the stigma of marijuana and elevate the customer experience.

At the head of the pack is Colorado-based Good Chemistry, which operates twin cannabis retail locations in Denver and Aurora. The Denver site, which began as a medical dispensary in 2010, now also sells cannabis for recreational use. The much larger, 3,600-square-foot facility in Aurora opened for recreational sales last spring.

At its Aurora store, Good Chemistry employs a mix of design cues – including wood trim, pendant lighting and warm accents of yellow, orange and green – that seem more akin to the aisles of a Trader Joe’s. The main floor includes four kiosk stations outfitted with iPads for customer research and “budtender” consultations. Walls are adorned with colorful art panels featuring illustrations that depict a category system in which strains of cannabis are paired unapologetically with their desired physiological effects: “Amplify,” “Relax,” “Relieve,” and “Sleep.” 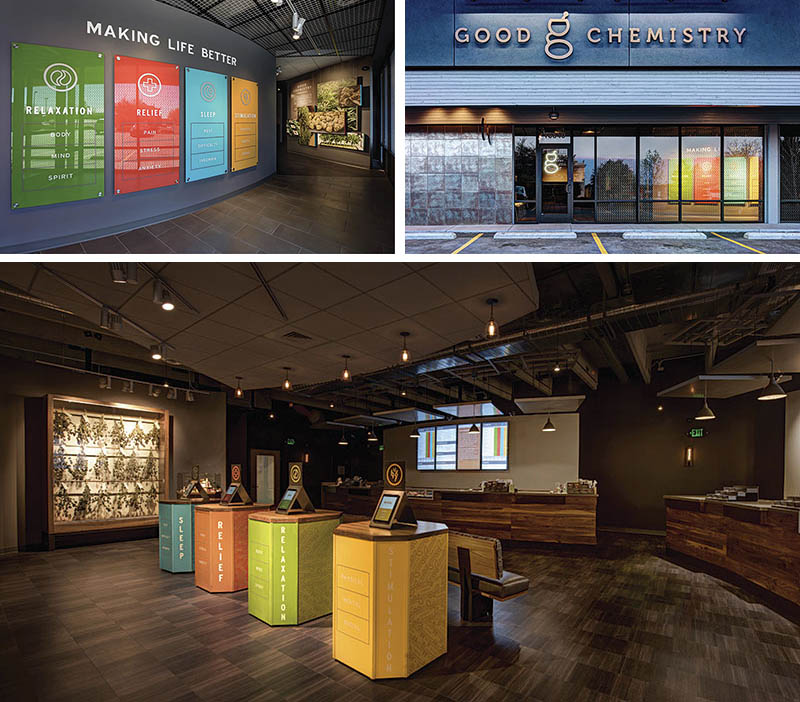 “Our goal was to create a broadly inviting and welcoming retail experience that you could find in any of the best malls in America,” says Michael Markowitz, president of Michael Markowitz and Associates in Santa Fe, New Mexico. Having worked with the likes of Anheuser-Busch and Panera Bread, Markowitz was among the handful of traditional branding gurus (along with graphic designer Joseph Duffy and architect Tony Coleman) that Good Chemistry CEO Matthew Huron brought in to design the store. Good Chemistry’s retailing model is a “continuously evolving hybrid,” says Markowitz. “For many of us, it is a brand new industry. Everyone’s learning on the fly.”

Similar though more restrained changes have begun to emerge on the dispensary side. In early 2016, for example, the New York-based healthcare company Columbia Care LLC opened its flagship medical marijuana dispensary in Manhattan’s Union Square neighborhood.

The concept, created by New York-based design firm RPG, is modern but with softer lighting and a warmer atmosphere than that of a typically stark institutional design. A patient waiting area includes colorful mid-century style furniture and features large-format photographs that showcase the beneficial properties of various cannabis plants. Inside, wood and neutral finishes complement a large table in the central meeting area and a hallway leading to private consultation rooms.

“The clean, modern design helps remove the stigma that’s sometimes apparent in dispensaries that operate in less stringent markets,” says Bruce Teitelbaum, CEO of RPG. “Our mandate was to support compassionate care. We created a welcoming, legitimate and professional environment in which the patient feels comfortable and where those who run the facility can speak from a position of authority.” 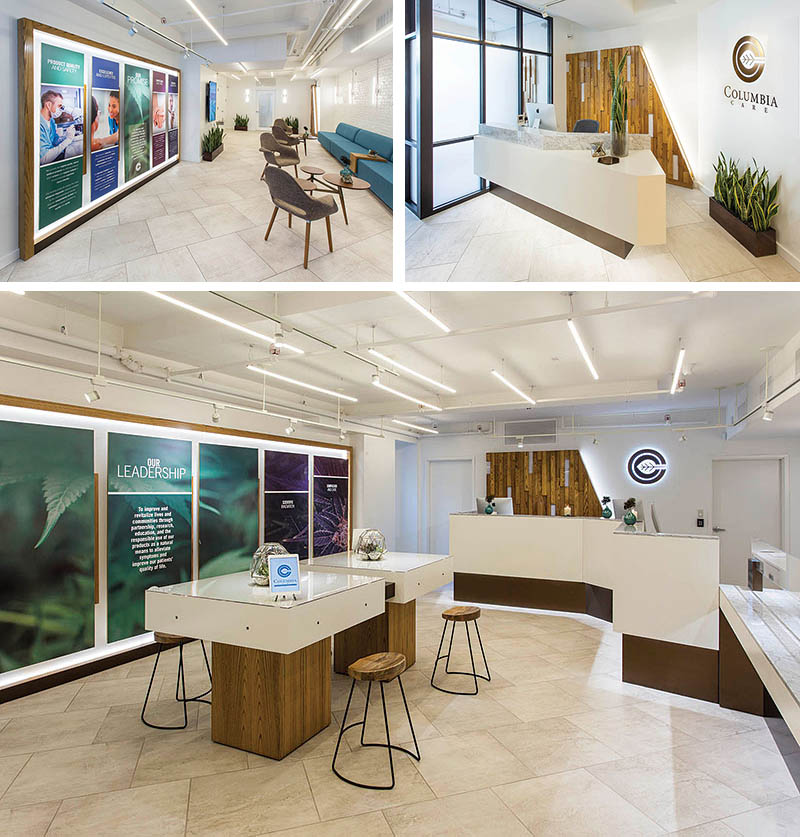 Despite an increasingly favorable legal landscape, the sale of marijuana in the U.S. remains a highly regulated business. The main distinction between medical and recreational sales is that the former are taxed at a lower rate, which allows dispensaries to charge less for their products. All cannabis operators must follow strict protocols (see sidebar for a checklist). For example, dispensaries require visitors to make an appointment and carry a medical ID card to enter the facility, while recreational stores must obtain a customer’s proof of legal age. For both, security cameras are required in multiple locations throughout the store.

In New York, where medical marijuana was legalized under the Compassionate Care Act of 2014, city inspectors at the Department of Health closely monitor dispensaries. “When you operate a medical marijuana dispensary, you also have to run the cultivation, which means you have to go from seed to sale,” says Teitelbaum. “There are strict rules with regard to purity to ensure the end product is meeting all standards.”

Colorado’s licensing and regulatory procedures are established by the Marijuana Enforcement Division (MED), a governing body within the state’s Department of Revenue. MED officials conduct regular inspections and closely monitor everything from the angle of security cameras to the placement of fire exits and backup electrical systems, says Stephen Spinosa, vice president of operations at Good Chemistry. “We require strict training of employees on all issues related to compliance,” he says.

In Colorado, about one-quarter of all infractions are tied to physical inspections. The most common issue is a failure to achieve adequate visual coverage with surveillance cameras, according to a recent statewide audit reported by Marijuana Business Daily, a leading industry publication. The fastest-growing area of noncompliance is related to labeling, packaging and product safety, per the paper.

While adhering to all of these rules is critical, retailers need to take a broader view when it comes to staff training and educating consumers on an emerging category, says Scott Kveton, a former mobile marketing executive who now runs Odava, a Portland, Oregon-based software firm that designs and sells on-premise equipment exclusively to cannabis retailers.

“Most of the software solutions on the market are focused too heavily on compliance metrics like number of plants or level of potency,” says Kveton. “It reminds me of the ’90s when everyone in tech was worried about gigabytes. Many consumers who are new to the category don’t care about those kinds of things. They want to know: does the product alleviate my back pain or help me sleep better?”

Spinosa agrees: “The quality and consistency of our products is what’s driving people to our store. We grow all of our own flowers. The staff needs to know the story behind the product.” 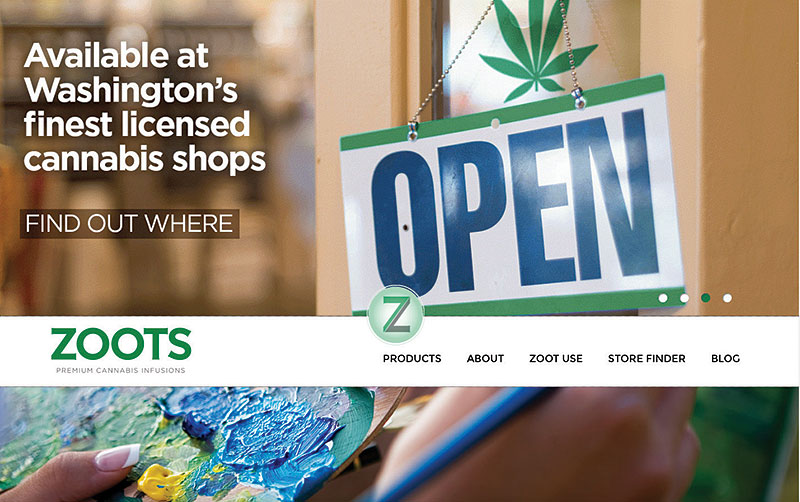 As consumers adjust to a new normal with regard to the cultural acceptance of marijuana, marketers sense that the product is destined to go mainstream. To a degree, it already has. Branding experts often describe the aromas of cannabis (they don’t like to call it marijuana, or heaven forbid, “reefer” or “weed”) in the same vein as the “notes” of wine, beer or coffee. Gourmet cannabis cookbooks are now hitting the market, while packaged edibles and ancillary products like extracts are fueling strong growth in the category.

“I’ve never seen a consumer products category evolve as quickly as this one,” says Markowitz. “Even if there’s a regression in legalization this year, it will be seen as a historical blip. The train has left the station.”

For now, big ad agencies are steering clear of the category. But that may change soon, as the sheer volume of potential new business continues to pass them by. Legal U.S. pot sales soared 17.4% to $5.4 billion in 2015, and the market is poised to hit $6.7 billion this year, according to Oakland, California-based tracking firm ArcView Group. That kind of growth in CPG is hard to come by.

Barriers also remain at the local level. In Colorado, for example, a major grocery chain recently refused to carry a neighborhood entertainment weekly with “blow-in” ads for local cannabis products because of the potential of those ads to spill out of the paper and be seen by an unintended audience. In the earlier days, dispensaries utilized sign flippers at high-traffic intersections, but the state has put the kibosh on these street corner staples.

Still, cannabis retailers continue to push the boundaries of their customer model. Good Chemistry is working on a limited text-based rewards program and considering traditional CRM tools like e-mail surveys. “That’s the road we want to go down,” says Spinosa. “We’re starting to figure out who are the people coming through our doors.”

The rules and regulations for cannabis retailers vary by state. But because of its market size and early legal adopter status, Colorado is paving the way in many regards. Here are some of the key guidelines for operators in the state: