Key Insights: Saputo research showed a tendency for younger people to look online for recipes, a shopper desire for freshness in Italian cheeses, and the increase in the use of fresh mozzarella in food service.

LINCOLNSHIRE, ILL. — Saputo Inc. worked with Albertsons Cos.’ Jewel-Osco this year to stage interactive events at the grocery chain promoting the manufacturer’s Frigo cheese. Jewel has hosted several “Perfect Pairing” and “School of Flavor” events in Chicago at Kinzie on the Rocks, the retailer’s first in-store bar.

Two high-profile events involved Frigo cheese and brand spokeswoman Emily Ellyn, a celebrity chef and food educator. The TV personality and her recipes also appear in some of the promotional materials for Frigo’s “Fresh Take on the Seasons” campaign, which began in June and concludes during this holiday season.

The program is the result of Saputo executives’ search for partnerships that align with Frigo’s target audience – 25- to 54-year-old moms and their families – while offering platforms to drive awareness and increased usage occasions, says Brad Panarese, Saputo marketing manager, retail dairy. “We’re leveraging our partnerships with Emily Ellyn to drive brand awareness across the entire year with exclusive recipes, content and online engagement,” he says. “But it’s really the execution in-store with key events and promotional elements that connect the shopper to what’s being communicated online. Participating in Jewel’s events, for example, help with that while also engaging their shoppers more with their local stores.” 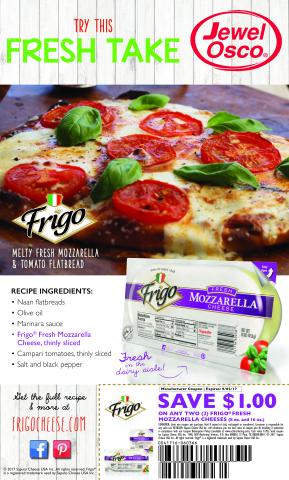 Because Frigo is primarily a cooking cheese, Saputo sought to promote shredded cheeses during the summer, fresh mozzarella in the fall, and ricotta, parmesan and mozzarella during the holiday season, Panarese says. Among the insights Saputo drew upon in building the campaign were research snapshots highlighting the tendency for younger people to look online for recipes, shopper desire for freshness in Italian cheeses and the increase in the use of fresh mozzarella in food service, he says.

The holiday segment of the campaign includes promotional packaging, digital coupons and more Jewel events. “Increased collaboration with Jewel allowed both of us the opportunity to test new ways to engage with our audiences,” Panarese says.

The relationship worked well from Jewel’s perspective, too, says Ian Neitzke, Jewel sales manager – dairy. “Saputo’s partnership with chef Emily Ellyn, paired with our shared roots as local brands in Chicago, have created a powerful tool for meaningful customer engagement and excitement, which Jewel alone cannot create,” Neitzke says. “Their participation in in-store events like Perfect Pairings and their banner-wide promotional activity have been invaluable to both of our brands’ strength in Chicagoland.”

Saputo plans to measure sales lift during the campaign to gauge success. The partnership with Simply Recipes was a first, driving significant growth with Saputo’s online community, Panarese says. The School of Flavor pairing also was a new addition to Frigo’s promotional arsenal.

Other partners to the campaign included Hangar12, Chicago, for brand and promotional creative; GT Universe, Chicago, for event execution; and News America Marketing, New York, for the FSIs. 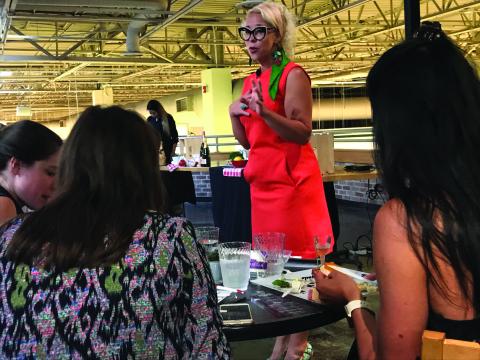 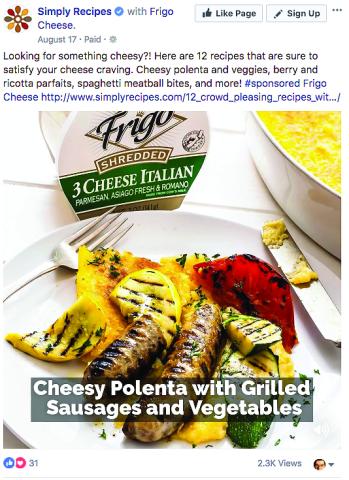