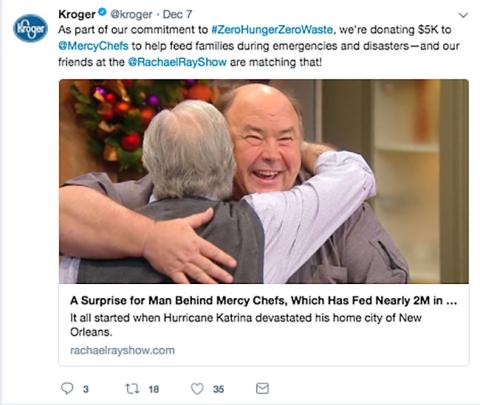 Kroger abandoned its annual "Bringing Hope to the Table" cause campaign benefiting Feeding America in 2017, instead spending the holiday season running a wide variety of smaller charitable efforts and promoting the "Zero Hunger/Zero Waste" initiative it launched in September.

The Bringing Hope to the Table website now links to a page within Kroger's corporate website that touts the retailer's ambitious goal of both eliminating food waste throughout the company and ending hunger in its operating area by 2025. Carousel ads on chain web pages, as well as Facebook and Twitter updates also link to the page, which hosts a carousel of Twitter updates with the hashtag #ZeroHungerZeroWaste. Kroger banners and divisions used the hashtag to tout holiday cause activity even if it wasn't food-focused. Among the regional efforts:

The Zero Hunger/Zero Waste campaign received support from TV (see below) and radio spots, run-of-press ads in newspapers such as the Dayton Daily News, and display ads on websites including The Daily Beast. It also got a plug on the Dec. 7 episode of Rachael, when Kroger donated $5,000 in gift cards to disaster relief organization Mercy Chefs. The Rachael Ray Foundation matched the contribution. A concurrent Twitter update promoted the episode.

Retailer-wide holiday cause activity kicked off early, with stores soliciting donations for Toys for Tots at checkout from Aug. 18 to Nov. 4. Facebook updates promoted the fundraiser.

Kroger also partnered with CPGs for a pair of cause programs. The retailer offered a free pack of Kimberly-Clark's Huggies wipes to all shoppers who purchased a big pack or two jumbo packs of Huggies diapers in stores from Nov. 5 to Dec. 2. Each qualifying purchase also triggered a donation from Huggies of six diapers (up to 1 million) to the National Diaper Bank. Huggies ran similar promotions at Meijer and ShopRite as part of its national "No Baby Unhugged" cause campaign.

Mars Wrigley's Extra tapped in to Kroger's "Honoring Our Heroes" cause platform by pledging that the in-store purchase of a pack of gum during November would trigger an in-kind donation (up to 25,000 packs) to the United Service Organizations. Extra also pledged $1 (up to $25,000) to the nonprofit every time a promotional video (see below) was shared on social media. The video was posted within the Honoring Our Heroes website as well as on the brand's YouTube channel and Facebook page.