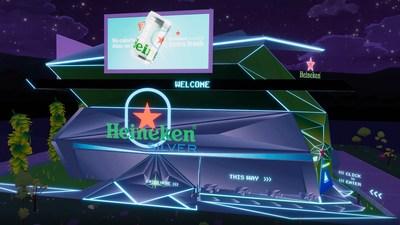 Heineken is bringing its beer brewing process to the metaverse with Heineken Silver, offering its “special A-yeast,” usually brewed in horizontal tanks, and replacing it with so-called “A-pixels” and “binary-coded hops” grown by non-player character (NPC) farmers, according to a news release from the lager beer brand. The entire virtual brewing process is overseen by Heineken's dedicated virtual brewing assistants, digitized stand-ins for its “star brewers.”

Heineken Silver was unveiled at a product launch event in Heineken's virtual brewery, where users were able to learn about how the beer is made in seconds, while enjoying pixelated lobster and caviar and visiting with Heineken ambassadors, including French professional football coach Thierry Henry, according to the release.

These elements come together to develop a unique beer that Heineken jokes is “brewed with 100% purified pixels, tripled-filtered through firewalls and uploaded with 5 million megabits per second.”

"At Heineken, we believe that connecting with people is vital to human existence, like the air we breathe or the water we drink, and we know that the metaverse brings people together in a light-hearted and immersive way that is really exciting – but it's just not the best place to taste a new beer,” Bram Westenbrink, global head of Heineken, said in the release. “Our new virtual beer, Heineken Silver is an ironic joke. It is a self-aware idea that pokes fun at us and many other brands that are jumping into the metaverse with products that are best enjoyed in the real world. For now, you can't taste pixels and bytes. So, we want to make a joke about that and remind everyone that nothing beats the taste of a refreshing beer, including our new virtual Heineken Silver, in the real world."

In addition, Heineken has partnered with Spanish street artist J. Demsky to help design parts of the virtual home of Heineken Silver within the metaverse.

“To be able to give people a way to artistically understand what a virtual drink could taste like, especially when you combine all the pixels and technology together, fits perfectly with who I am and the art I like to create,” J. Demsky said in the release. “I hope people love my interpretation of what virtual Heineken Silver could be like if it had a flavor."

Decentraland is a virtual reality platform powered by the Ethereum blockchain. Users can buy virtual plots of land in the platform as NFTs using Decentraland Mana cryptocurrency and create virtual structures. It was opened to the public in February 2020 and is overseen by the nonprofit Decentraland Foundation. Molson Coors' Miller Lite tapped the metaverse company for its Super Bowl efforts this year to bring a virtual bar to patrons during the game.