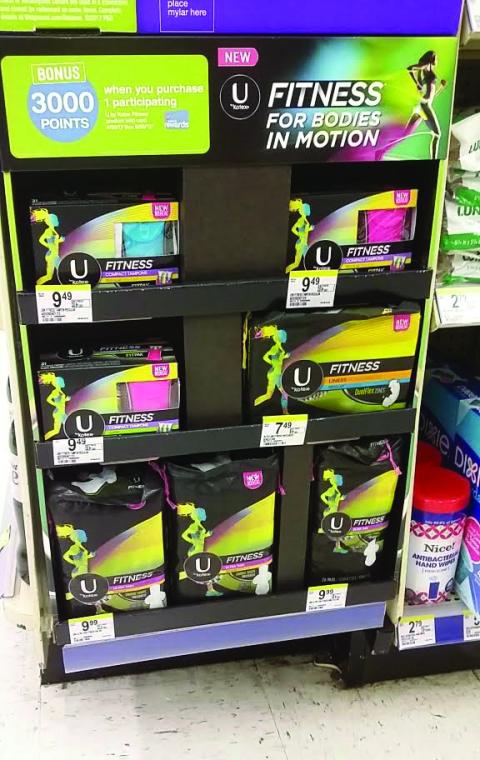 IRVING, TEXAS — To convey its message that active women don’t need to be held back by their periods, Kimberly-Clark’s U by Kotex set out to influence shoppers at Walgreens.

The drugstore chain was a focal point for the May launch of U by Kotex Fitness tampons, pads and liners. “The launch expands on the brand’s commitment to improving periods, period experiences and the feminine category by tackling a new stigma – working out on your period,” says Greg Kearns, K-C’s brand manager, shopper marketing, for Walgreens.

Based on insights that the Walgreens shopper is efficient and intentional with her purchasing decisions and spends minimal time in the aisles browsing, K-C knew it was important to influence her before she is in-store, Kearns says.

To that end, the manufacturer started with pre-launch ads in March via Catalina, St. Petersburg, Florida. Then marketers worked with Boston-based Breaktime Media for online content and San Francisco-based Linqia for blogger and influencer activation, while also delivering an offer through Denver-based Ibotta.

K-C also collaborated with internal Walgreens teams to place a banner ad on the retailer’s website, insert ads in Walgreens’ April and May coupon books and promise consumers 3,000 Balance Reward points with purchase of U by Kotex Fitness products in May. Shelf tags and sidekick displays in 2,500 Walgreens stores promoted the offer. “The sidekick gives us stopping power,” Kearns says. “We used bright colors and eye-catching imagery to grab shoppers’ attention and intercept their trip before going into the aisle. The goal was to drive trial by making it available before going into the aisle.”

On a national level, K-C partnered with Stanley, who has 283,000 Instagram followers, to help launch U by Kotex Fitness. Stanley hosted a media and influencer event in the spring to announce the partnership and preview product innovations. Most sampling happened during that time, Kearns says.

Specific to retail, K-C continues to look closely at share and sales as metrics of success. The launch is tracking well against Walgreens-specific goals, and K-C plans to take a closer look at the end of the year at performance to determine ROI and potential optimizations, Kearns says.

On the digital front, the Breaktime Media program performed above benchmarks across the board (engagement time, user-generated content, social sharing and coupon downloads), with 44% of engaged consumers clicking to print a coupon and 10,000 consumers creating their own fitness kit. “We also saw double the expected engagements from our work with Linqia, driving more than 45,000 views on our collective online content,” Kearns says.

BRAND: U by Kotex Fitness

KEY INSIGHT: Active women don’t want to be held back by their periods. Since Walgreens shoppers are efficient and intentional with purchasing decisions, it’s important to influence them before they are in-store.