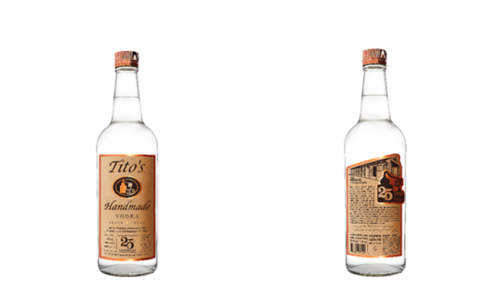 Tito’s Handmade Vodka this month kicked off a yearlong campaign to celebrate its 25th anniversary, amplifying the vodka brand’s history and come-up story and thanking its loyal consumers.

At launch on April 6, Tito’s unveiled a new commemorative bottle design (featuring augmented reality-enabled artwork hand-painted by artist Paul Mann), a 30-second film summing up the brand’s 25 years in business, and a contest to find and thank the biggest Tito’s fans in the U.S. Additional anniversary activations are slated for later this year.

The commemorative bottle depicts the brand’s signature copper cap along with a new spin on the iconic label, including a special 25th anniversary emblem. The back of the bottle communicates a short paragraph detailing the brand’s story and a special ode to fans.

“While perfecting his vodka recipe, Tito somehow also found time to design our label himself back in the mid-'90s. Since then, our bottle’s simplicity, modest brown paper label and copper cap have made it instantly recognizable on store shelves and back bars,” said Taylor Berry, vice president of brand marketing at Tito’s Handmade Vodka, in a news release. “The 25th [anniversary] design keeps the spirit of our beloved label, so our fans know it’s the same great juice on the inside, but we’ve included special elements to celebrate our anniversary. … You can always keep the bottle as a reminder of the integral role you played in our story.”

The AR-enabled experience from the label gives consumers an interactive glimpse into the Tito’s origin story. By scanning a QR code with their smart devices, consumers can bring in-store displays (featuring artwork by Mann) to life and learn more about the Tito’s story in four interactive chapters: “The Distillery,” “The Juice,” “The Hometown” and “The Dogs.” Once complete, the first 5,000 users can sign-up for the “Tito’s Taster” email list and get a limited-edition copper 25th anniversary bottle topper mailed to them. 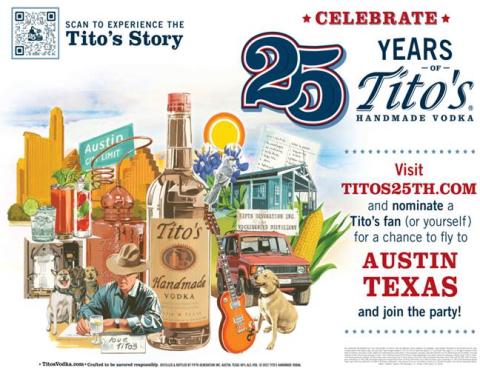 The dedicated short film (see at bottom), which sums up Tito’s 25 years in 30 seconds, is being featured across Tito’s digital and social advertising, including a dedicated anniversary microsite.

To continue the momentum, Tito’s is also awarding 25 consumers with a trip to its hometown of Austin, Texas, from Oct. 13-16, to attend its 25th anniversary celebration. Entrants are invited to nominate the Tito’s fan in their life for a chance to win, though self-nominations are also encouraged.

Tito’s asks entrants to share in writing what makes them a true fan of the brand (e.g., funny memories or a new cocktail invention). Winners will be flown to Austin, where they’ll be invited to attend a three-day event including a pit master-led barbecue and VIP amenities at Tito’s Stillhouse Lounge during the Austin City Limits Music Festival. The brand will also award a select number of secondary winners with a signed and framed Tito’s 25th anniversary print.

“Our loyal Tito’s fans have been the force that’s made the brand into what it is today, and we are so thankful for each and every one of them and their continued support,” said Frank Polley, VP of trade marketing at Tito’s, in the release. “One of the best parts about working at Tito’s is hearing everyone’s stories of how they discovered the brand, or their favorite memories that involve some Tito’s being poured.”

Throughout the year, Tito’s will also unveil additional activations across the country to thank loyal consumers for their continued support including unique out-of-home (OOH) murals around the country featuring Paul Mann’s custom artwork.

Additionally, Tito’s will continue its support of nonprofits and communities. Consumers can be on the lookout for funding opportunities to support those who embody the entrepreneurial spirit that started Tito’s Handmade Vodka 25 years ago, according to the release.