A Tipping Point for the P-O-P Industry? 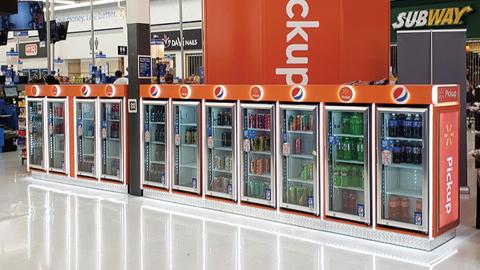 Touchless merchandising and ‘Shop Online’ signs are here to stay. But what about traditional P-O-P displays?

In February, candy maker Mars Wrigley and ShopRite began testing Smiley, a mobile robot (from robotics provider Savioke) that is traveling the aisles of a Monroe, New York, store to serve as both a checkout-display-on-wheels for impulse purchases and a roving safety monitor: The device (see photo) carries sanitation wipes and presents messages about social distancing when it detects too many shoppers nearby.

When you consider the fallout from the COVID-19 global pandemic across the retail landscape, it’s clear that the virus was not an equal opportunity assailant. “Essential” channels including mass, grocery, drug and home improvement all flourished – some earning record-breaking sales – while department stores and other discretionary channels like fashion floundered.

Likewise, the pandemic was a major boon to digital shopper marketing and a decided bust for traditional merchandising as concerned consumers shifted to online shopping: 77% of brand marketers increased spending on digital activity last year, while 43% decreased their allocations for in-store marketing, according to our 2021 Path to Purchase Trends Report (published in January). The shift came, in large part, out of necessity, as only 38% of the programs originally planned for 2020 ran as scheduled.

Success for many P-O-P companies during the pandemic was hit or miss, depending on the particular combination of retailers and product categories in their customer base, as well as which stage of production cycle they were in during when the pandemic first peaked in early spring.

In grocery channels, stores were initially focused on restocking shelves and less concerned with promotional merchandising, says Chris Cummings, national sales manager at Green Bay Packaging in Wisconsin. “If you’re a Target or Walmart operating during the pandemic, your number-one priority is the supply chain and getting big boxes of [essential supplies] out on the floor. It’s not a back-to-school program or Halloween promotion.”

“Overall, the pandemic reduced the programs that were run, as brands and retailers focused on the safety of employees and shoppers first, and then on maintaining their supply chains,” says Dan Sabanosh, director of shopper marketing at Great Northern Instore, Racine, Wisconsin. “Fortunately, we were able to weather the shift. [We had] a broad range of customers that included some decreases in activity as well as some increases in certain categories.”

“Some stores postponed orders, but then Target, Walmart and Costco all said, ‘No, we’ll take them,” says Mike Eckert, president of Design Phase in Waukegan, Illinois. “We were still manufacturing, shipping and installing at retail throughout the pandemic.”

So not all product categories were affected equally. “Impulse items [such as] candy, gum, mints and single-serve chips were heavily impacted in a negative way,” says Regina Bailey, senior director of retail/category strategy at Menasha, Neenah, Wisconsin. “Those manufacturers were looking for ways to interact with click-and-collect and curbside opportunities.” (Hello, Smiley.)

“The way people shopped the category changed over the past year, and we’ve adapted our consumer engagement strategies in response,” Mike Gilroy, VP of trade development and sponsorship at Mars Wrigley, told Progressive Grocer. “We’re working with retailers on new in-store merchandising opportunities.

Meanwhile, demand for merchandising in the wine and spirits category surged as on-premise drinking became off-limits legally and at-home consumption grew. “Off the shelf, freestanding merchandising has catapulted in the last six to nine months,” Jerry Fox, CEO of Bish Creative, Lake Zurich, Illinois, said in February 2021. “That’s true of CPG in general, but in particular for our clients in the wine and spirits industry,” which include Diageo and Constellation Brands.

So while there maybe have been a precipitous drop in secondary merchandising for a brief period at some retailers, the longer-term impact might not have been so dramatic: IRI estimates that CPG retailers have been carrying only about six fewer displays per store since September compared with the prior, pre-pandemic year. That’s significant, but not catastrophic.

“We are starting to work on lots of new opportunities for the second half of 2021,” says Jeff Rafalski, vice president of new business development at Vanguard Packaging in Kansas City, Missouri. “Opportunities are slowly emerging as brands look to position their strategies post-COVID.”

It’s also worth noting that the massive shift to e-commerce actually had a positive effect on some of the more traditional sectors of the P-O-P business. For example, increased packaging and shipping needs led to double-digit increases in sales of corrugated material last year, says Cummings at Green Bay Packaging. “In a good year, corrugated might be up 1% to 2%. We were up 11% [as recently as] December,” he said.

In fact, the e-commerce migration even “created shortages in container board” because home delivery requires more packaging than activity through conventional retail, explains Glen Gardiner, owner and president of Abbott-Action in Attleboro, Massachusetts. “Raw materials continue to be in short supply, which adds to lead time and causes additional waste on the corrugators.”

There is pretty clear evidence that shoppers are pleased with some of the behavioral shifts they’ve made and the resulting changes they’ve witnessed to the store environment. Institute research conducted last fall identified a shopper mindset that is much more purposeful, intentional and mission-focused about trips to physical stores. This fact should inform future product display strategies in a variety of ways, including:

Faster trips needed: In-store dwell times dropped dramatically in 2020 – by as much as 50%, according to some estimates – as health-conscious shoppers spent less time in stores. That put the onus on retailers to make it easier not only to navigate the aisles but to find the products they want.

And it put the onus on product displays to tell their stories faster. “People were spending less time in stores,” said Fox at Bish Creative. “That made it harder to catch the shopper’s attention and increased the demand for disruptive merchandising.”

No-touch trips: There has been a surge in demand for product displays with touchless features such as QR codes or augmented reality (see L'Oreal photo below) that let shoppers learn about product features and benefits without physically interacting with displays and packaging.

“We expect a lasting shopper sensitivity to shared contact and close interaction,” says Rich Butwinick, founder and president of MarketingLab and SellCheck in Minneapolis. “Displays should allow for more shopper spacing – shoppable from three or four sides. We expect brands to create new engagement moments based on socially distanced queues.”

“Before the pandemic, most digitally enabled merchandising displays included touchscreen or lift-and-learn components,” says West at IMS. “[Now] we’ve been offering a lot more options that are built around augmented reality and scannable codes, so shoppers can use their phones … without having to directly touch anything. These experiences will be a larger part of future interactive displays.”

Design Phase’s new touchless “Wave and Play” display, now in Costco stores, lets shoppers place their hands over a button to play a video demonstrating various product features and benefits, explains Eckert. (“We received plenty of new orders for displays for LG TVs, electronics, headphones and Bluetooth speakers,” he adds. “People were buying those items up like crazy because they were spending so much time at home.”)

Omnichannel trips: Shoppers now often have one hand on the shopping cart and the other on their smartphones. Retailers are quickly adapting their store environments to address this fact and asking brand partners to do the same. It will require displays that can connect shoppers to online inventory and information, but also displays that address the store’s evolution into more of an e-commerce fulfillment center.

One example of the latter is PepsiCo, which worked with Walmart to install coolers for single-serve beverages alongside the pickup lockers for online orders in one Minneapolis-area supercenter (see photo at top), keeping the impulse buy possible even for online shoppers.

And if he isn’t already doing so intentionally, the aforementioned Smiley, too, is foreshadowing the day when most shoppers will be handling their own checkout throughout the trip rather than at the very end. 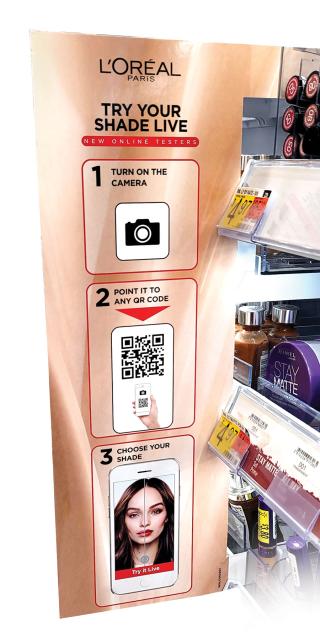 And note that Walmart is creating new brand marketing vehicles both inside and outside stores (as part of curbside pickup) to work in tandem with the Walmart Connect “retail media” infrastructure it’s amassing online. While these new offerings will largely consist of digital signage, they still represent continued dedication to the brick-and-mortar environment.

Of course, the trend toward e-commerce was already affecting traditional in-store marketing, as retailers and brands have confronted an omnichannel marketplace. Should stores only carry the highest volume SKUs? Should they devote more space to product experience and exploration and less to product shelf placement? Will checkout lanes go away completely? The pandemic has intensified the need to answer questions like these.

And yes, the shift to e-commerce has led many CPGs to send more money in that direction. “We are certainly seeing a commensurate shift in P-O-P investment from in-store to online,” says Butwinick. “With accelerated advancements in delivery and pickup, the online experience is simply a newer P-O-P moment. While in-store P-O-P is vital – and will eventually rebound – the online experience enables a contextual purchasing moment.”

For P-O-P companies, these changes will likely require continued diversification into packaging and other capabilities that are needed regardless of where the “point of sale” is. Vanguard has developed a BoxGenie tool that enables smaller brands to design their own custom packaging. “Many brands experienced late deliveries, supply chain disruptions and retail uncertainty [last year],” explains Rafalski. “This accelerated the need for a more flexible, consolidated supply chain solution [and a] turnkey merchandising model.”

“Packaging needs to be improved and differentiated for the e-commerce distribution model” which involves “smaller orders, smaller packages [and] higher costs due to the proliferation of package types,” says Gardiner at Abbott-Action. “Attention must also be paid to the consumer experience, as packaging is a reflection of the brand now more than ever.”

But these changes also demand new strategies for old merchandising practices. No, the store won’t soon be overrun by robotic shippers chasing shoppers through the aisles. But product displays will need to evolve with the shoppers they’re seeking to attract.

“Consumers demand added value from shopping experiences as the tradeoff for visiting brick-and mortar locations, requiring entertainment or education they can’t get from online shopping,” Rafalski says. “We see the development of these types of interactive and engaging experiences as table stakes in the coming years.”

“The moment of truth in-store will continue to be very fast and require clear, concise engagement that the shopper can utilize outside of the brick-and-mortar environment,” says Bailey at Menasha.

Is the standard corrugate shipper become obsolete? Not as long there are new products to launch and promotional volume to sell through. If more than a decade of sustainability concerns and decades of clean-store initiatives haven’t killed them yet, how much harm can a little pandemic do? Despite the massive growth in online grocery shopping this year, the vast majority of CPG sales still take place through the physical store.

And as long as that fact remains true, the P-O-P marketplace still has some things to be Smiley about.