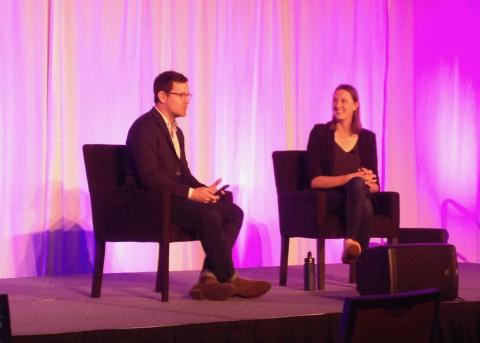 One trend that pervaded the stage and conversation on day two of the Path to Purchase Institute’s Future Forward conference was retail media and its increasing presence in shopper marketing strategies. Here are some key takeaways that Institute editors noted from executives speaking on the ever-evolving subject.

“[Kimberly-Clark] had a role called ‘retail media lead’ and they initially started in our customer sales organization. ... As time went on, retail media [became] ‘media.’ So, we have to make sure as those lines blur, we're connecting what we're doing on Amazon on Walmart and Target and Kroger, to what we're doing on Meta and Google and all of our other platforms. That role has now moved into our centralized media organization, so that they're more connected to our brand team, more connected to our agency partners,” Sara Weitzel, global search lead at Kimberly-Clark, said during her Trend Talk on connected commerce with Nich Weinheimer, general manager of strategy and commerce at Skai.

Joseph Annunziato, vice president of sales at Vizit, emphasized how e-commerce and brand imagery go hand-in-hand with retail media and play a key role in shopper decision-making and can mean the difference between an “add-to-cart” or a shopper's dismissal, during his Trend Talk session. He said that brands and retailers are investing more in visual content creation and retail media, but aren’t investing as heavily in tools or analytics to make that advertising spend more impactful.

Andrew Harrison, head of retailer marketing at the Kraft Heinz Company, touched on the affordability and accessibility of retail media during his Trend Talk with Kroger Precision Marketing’s Jenny Holleran.

"For retail media to grow, it has to become an extremely cost-effective tool – in comparison to traditional media – because that's the only way budgets are going to be there,” Harrison said. He later noted that “the brands that really highlight that omnichannel shopping experience are the ones that are going to win. And no one’s really cracked that code yet.”