Ahold Delhaize’s Stop & Shop in September began piloting “The Breadbot,” a fresh bread-making machine, at a Milford, MA-based store as the company adds more unique elements to differentiate itself from competitors and reverse dropping sales.

Also known as “The Mini Bakery,” the Breadbot mixes, forms, proofs, bakes and cools 10 loafs of artisanal bread at a time. The breads come in a variety of flavors including white, wheat, whole wheat, nine grain, sourdough and honey oat. However, availability varies based on demand. Bread is baked and sold fresh each day, excluding the need for the artificial preservatives. 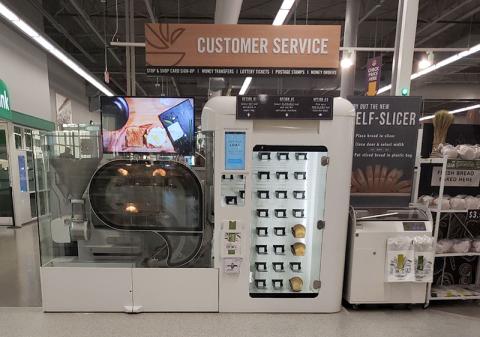 To operate, shoppers choose how they would like their bread using the touch screen on the machine. They can choose to have an unsliced, hot loaf which they can take home after baking in a provided paper bag; they can select a sliceable loaf and use the new self-slicer machine located adjacent to the Breadbot; or they can simply pick up a pre-sliced, pre-packaged loaf from the shelf next to the machines for $3.99. 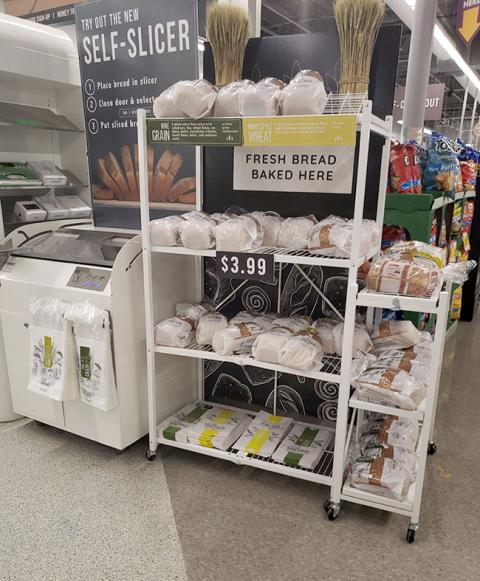 The self-slicer allows shoppers to choose between thin, medium and thick slices depending on their preference. The actual Breadbot is enclosed in a glass case, adjacent to where the unsliced loaf sits once baked. A television is positioned above the machine and plays cooking demos from an aerial view.

“Making the bread locally, right in the store with The Mini Bakery, has a very positive environmental effect,” Randall Wilkinson, CEO of Wilkinson Baking Company, said in a September media release. “The fleets of delivery trucks and the fuel they use are reduced, since only dry ingredients need to be shipped. And, because The Mini Bakery keeps track of its production, it’s able to predict how much bread it should bake in order to meet demand. Everything it bakes sells within hours. Nothing goes to waste.”

The introduction of the Breadbot and the likelihood of its expansion into more stores following its successful pilot is part of Ahold Delhaize’s “Re-imagine Stop & Shop” program intended to bring in new and unique elements to the chain to help differentiate itself from competitors. Stop & Shop has seen sales decline recently, though that has been partially offset by strong performance from most of Ahold Delhaize's other U.S. brands.

In Ahold’s third quarter earnings call on Nov. 6, president and CEO Frans Muller said Stop & Shop is a big focus going forward. "We saw a strong overall performance at our U.S. brands, particularly at Food Lion and Hannaford,” Muller said. “Stop & Shop is operating in a challenging sales environment, but we are encouraged by improving transactions as we move into the fourth quarter. Our ‘Re-imagine Stop & Shop’ program is off to a good start, and we are pleased with the sales uplifts seen in the 21 remodeled Long Island stores, which are performing in line with our expectations.”

In addition the 21 stores already remodeled, the previously announced Re-imagine Stop & Shop program will invest $1 million to $10 million at each of Stop & Shop’s 415 locations, adding new technology, trendy products and a fresh look and feel to the chain.