So-Lo-Mo Spotlight: At the Expo

So-Lo-Mo Spotlight: At the Expo

By Dan Ochwat - 11/01/2016
Get great content like this right in your inbox.
Subscribe
So-Lo-Mo editor Dan Ochwat walks the Expo floor looking for what’s new in social, location-based and mobile marketing tactics

Rosemont, Ill. — With more than 130 exhibitors at the ready, I cruised the aisles of the Path to Purchase Expo on Sept. 21 and 22 needing just a notepad and a handshake to hunt down some interesting activity in the So-Lo-Mo space. My goal was to discover new companies and to experience new tools. Here’s some of what I learned:

I might be a woman
During a tremendously helpful docent tour sponsored by Arc and presented by Arc executive Nick Jones, a stop at the VSBLTY booth showcased a truly impressive in-store technology that runs digital content on glass like a cold vault door, but it works on any glass panel. VSBLTY had a mini-fridge in the booth demoing the different messages that shift on screen and how Nestle used it to daypart with different beverages. The brand learned that from 6-10 a.m., shoppers were buying Ice Mountain water, so the screen ran content for that brand during those hours. Then, for two hours, Perrier took center stage. At noon, vibrant San Pellegrino digital content ran. The self-contained unit tracks location-based data in real time and leverages cloud-based facial analytics that report on shopper dwell time and data such as age, gender and race.

While standing before the unit and watching the dashboard report, I did notice that it questioned whether I was a man or woman (thanks to the longer locks versus the shorn look in my headshot on page 42). While instances like that don’t register and get thrown out of the data set, I did for a split-second wonder about the importance of gender mapping. 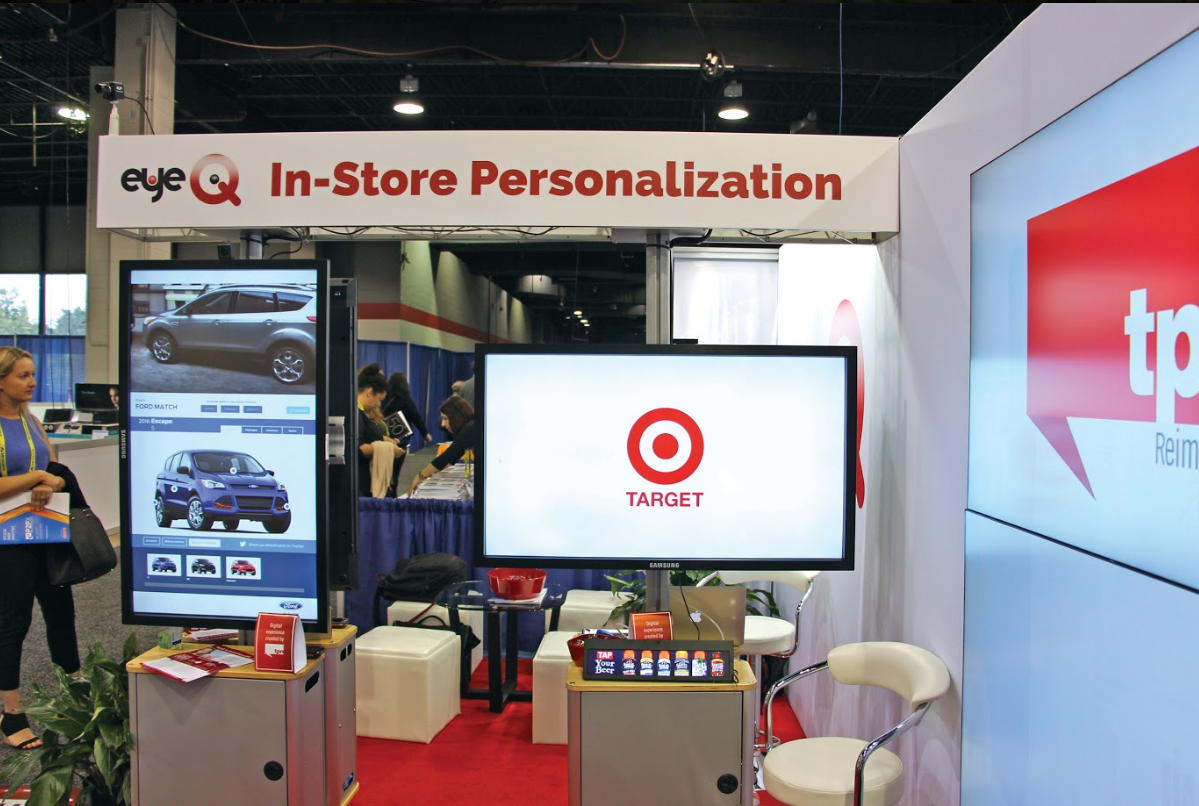 While visiting the eyeQ booth, I also saw a demo where facial technology in a digital screen read if a male or female was in front of the display, and the recipes and content changed based on that. It was cool how it registered my colleague as he approached the screen, but I do wonder in general about the hairiness that comes with self-identifying as a gender and providing content based on gender, versus shopping history, for example.

The eyeQ booth blew me away with a demo of a campaign at a Ford dealership where shoppers entered their Twitter handle and, via IBM and Watson, the screen recommended a car based on Tweet history. It goes one step further by matching that history with the best salesperson based on personality. Beyond the screens, eyeQ can also put a camera on an in-store display to perform in-store tracking and effectiveness.

The gyroscope and accelerometer could disrupt the beacon 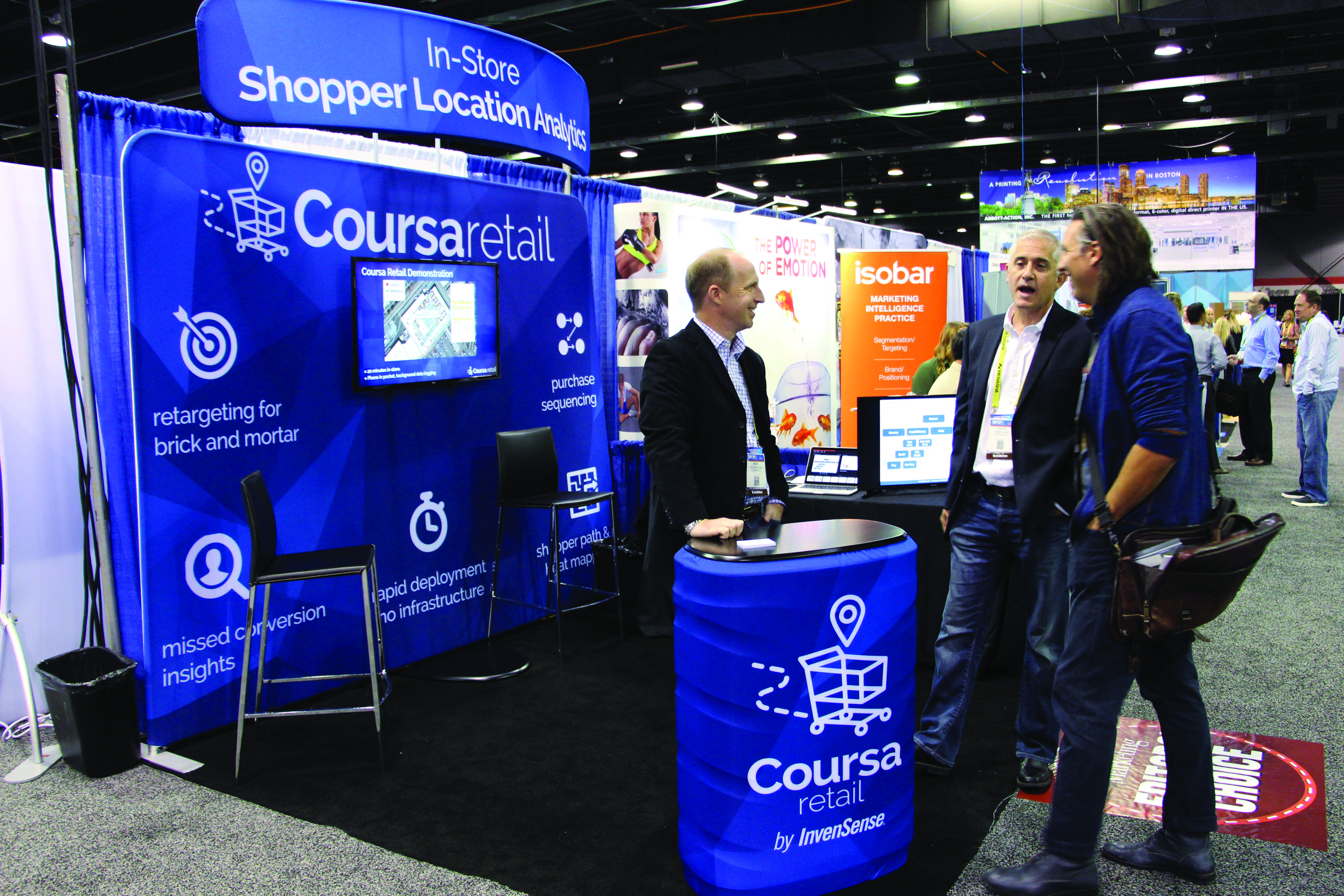 Only six months old, Coursa Retail presented how it uses the smartphone’s motion sensors (gyroscope and accelerometer; the sensors manage different twists and angles) to track a shopper’s footpath and behavior. Shoppers don’t even need to turn on their phones. They opt in to the store’s app, a beacon confirms this at entrance, but then Coursa’s mobile software development kit and cloud-based platform tracks the motion sensors to work with retailer data and deliver location-based insights. InvenSense is the parent company of Coursa and the brain behind the motion tech for several industries.

Bar codes are disappearing into packages 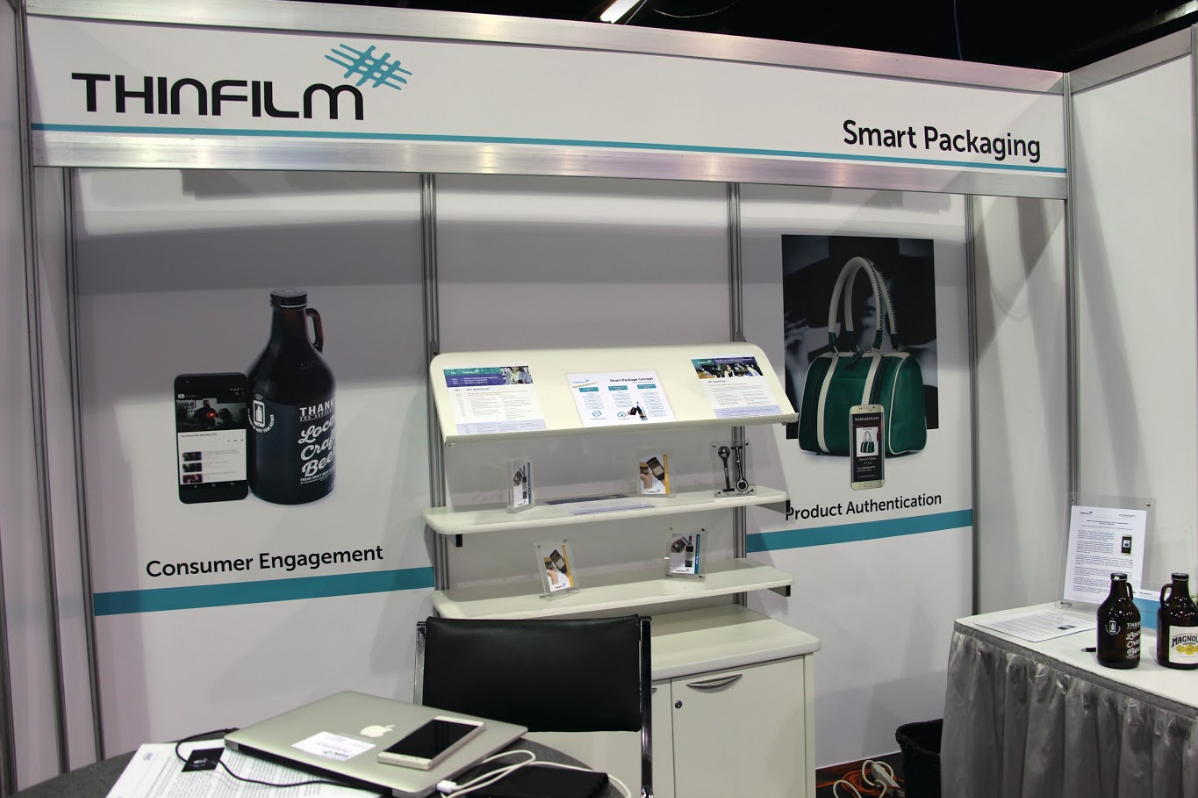 While visiting the Thinfilm Electronics booth, I saw the power of its NFC-enabled smart tags that actually read in two states of action. The tags come in different shapes and sizes and affix to packages in different ways, but the key being at the point of entry. For example, for a sealed Clinipure box, the shopper does nothing but hold the phone to the package. That triggers information that the package has not been tampered with, along with a host of product info. After the box is opened at home and the product used, phone users can scan the package and be prompted with a new message to reorder or receive other brand details. 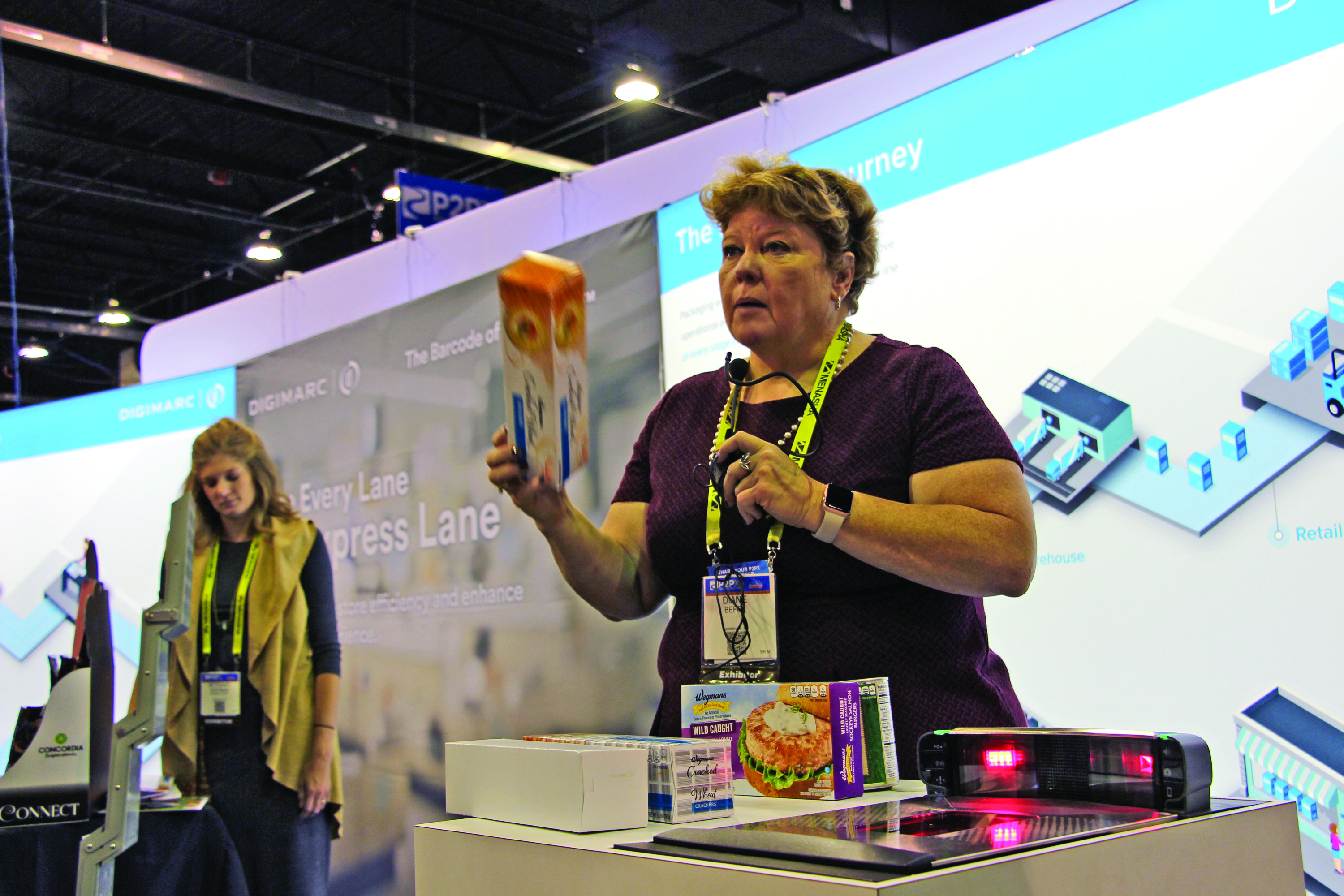 Digimarc also showed how its smart bar codes work. The company embeds the code into the entire product package and a smartphone (NFC or not) can scan the code at any part of the package to bring up content, videos or add the item to a shopping list for checkout. The package can be scanned with an image-reading POS system at checkout too.

Third-party apps keep evolving
Ibotta showcased its innovative, in-app buying feature, also mentioning to me a new partner in iTunes. In the Ibotta app, a user can swipe through tiles of mobile retailer apps offering deals. They grab the reward from iTunes in Ibotta and are taken to that app to purchase and use the offer storewide. This is different than Ibotta’s traditional model of a brand hosting a product and offer, and a shopper goes in-store to buy and gets the reward after receipt processing.

Shopkick unveiled a soon-to-be launched grocery tab (Q1 in 2017) within the app as well as a shopping list tab. It’ll be Shopkick’s biggest innovation in its six-year existence, all thanks to the insight that a majority of Shopkick users were using the app in grocery stores to scan items for rewards even though the app had focused on other retailers. The “Kicks” or rewards on grocery purchases are going to be higher, and it will be a nice pre-shop tool to help plan a grocery trip looking at product offers and build out a shopping list (80% of shoppers still use a paper list). The new tab aims to bring in grocery store partners, potentially adding grocery store gift cards as rewards.

Swift Shopper is a new mobile grocery app that launched at Expo. A beta test is underway, and the app is looking to add grocers. The app is focusing on regional grocery stores and offers features like a loyalty card organizer, shared shopping lists, nutritional info on products and the ability to scan items while shopping to speed up checkout.

Influenster is another app that caught my eye, leveraging ratings, reviews and the power of influencers. The mobile app has a scanner so products can be scanned in-store and shoppers can see what Influenster members have to say. These are regular shoppers, not a network of influencers. Brands can use Influenster to invite the users for product testing to build up reviews. They can offer digital coupons through location-based push notifications, too. 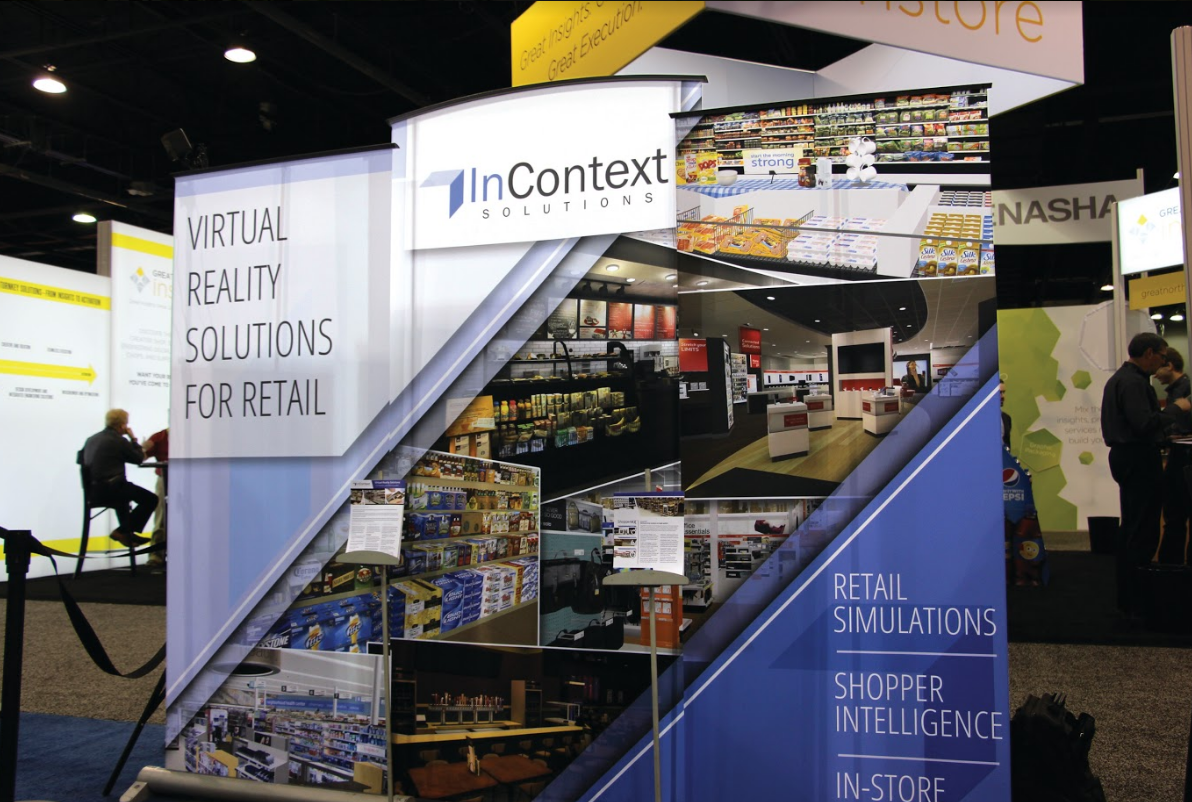 Lastly, virtual reality and augmented reality had a bigger part in the show than ever before with Kantar Retail Virtual Reality, InContext Solutions and Aisle411 showcasing their technologies. The VR booths seemed crowded with attendees wearing the headsets and entering virtual store simulations. While InContext referenced the potential that the headsets have with a person in Chicago transporting to a grocery store in London or a person from their home pantry transporting to a virtual store to buy products, the virtual reality of today at the show focused on how VR can help brands and retailers test retail concepts and experiences more efficiently.

Aisle 411 demoed its recent collaboration with Philips Lighting and its indoor positioning technology that is embedded in the fixtures. Four stores are piloting the fixtures that communicate with a smartphone’s camera and Aisle 411’s mapping abilities. 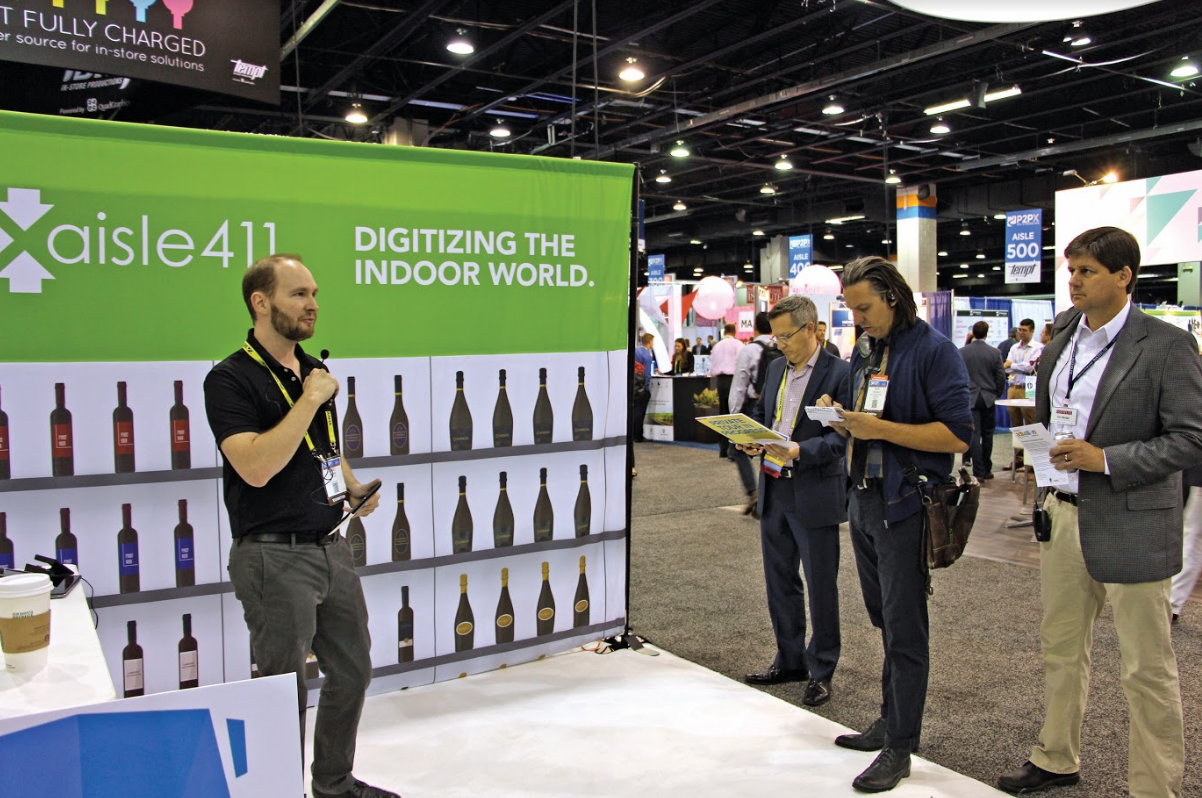 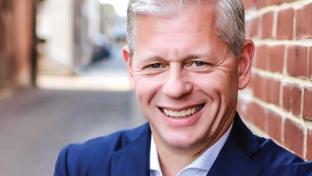 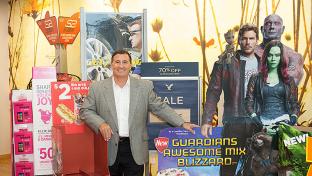 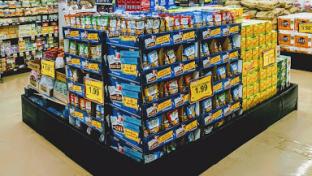 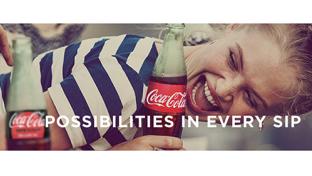 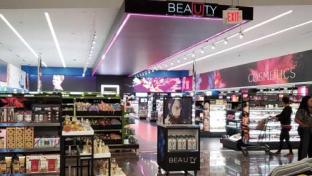