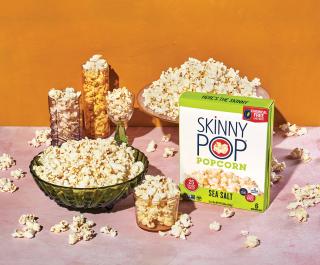 Hershey Co.’s Amplify Snack Brands is reminding consumers of its wildly popular SkinnyPop products, and that they should enjoy as much of the low-calorie popcorn snack as they want. In fact, SkinnyPop launched a campaign to encourage consumers to make it a “Whole Bag Kinda Night.”

Using consumer research and a SkinnyPop-lovers social media group that lent its insights, Amplify began to understand consumers’ relationships with snacking in general. Looking at all the data, it became apparent that SkinnyPop consumers love that they can enjoy a lot of the product without feeling the guilt usually associated with salty snacks, according to a company media release.

Building on that knowledge, the company has evolved SkinnyPop’s positioning from an everyday, low-calorie popcorn snack to one that consumers can feel good about indulging in. “We know our consumers love eating large quantities of SkinnyPop, and we wanted to officially give it a tagline,” says Mark Chu, the brand’s director of marketing.

The SkinnyPop team further wanted to celebrate the joy that can come from something as simple as a bag of its popcorn. “Throughout the pandemic, consumers have continued to look for celebrations (as small as it may seem) to help break up the monotony of their days,” says Chu. “We’re only highlighting a few occasions of what can constitute a ‘Whole Bag Kinda Night,’ and the extendibility of this campaign is inviting consumers to establish their own occasions.”

Chu explains that ready-to-eat (RTE) popcorn spans many demographics, since most popcorn is all-family-friendly. The brand has been experiencing growth from most of its consumers, not just a specific group, he notes. “The campaign is relevant to both our die-hard fans and people who haven’t had SkinnyPop before,” Chu says.

The company is steadfast in its efforts to continue to put consumers at the forefront of every decision it makes. Over the last two years or so, Chu says his team started to see a shift in the conversations surrounding SkinnyPop online — and that while SkinnyPop is still relevant among dieters, the brand and product are also incredibly relevant to those who aren’t necessarily counting calories. “We’ve been able to tap into a large group of snackers who are just looking for a simple, delicious snack that they can feel good about eating.”

At the same time the company’s social listening showed more people unabashedly posting about staying in with a bag of SkinnyPop, the pandemic accelerated the growing trend of Americans staying in for New Year’s Eve versus going out, Chu says. “Our research showed that this year [2021] only 24% of people planned to attend a public event or party,” he reveals. “These insights served as a creative springboard for this campaign platform, representing a substantial pivot from SkinnyPop’s previous marketing efforts and inspiring our decision to drop the full 60-second music video on New Year’s Eve.”

Chu says the SkinnyPop brand will continue evolving its positioning throughout 2022. The company looks forward to bringing consumers more fun and exciting ways to enjoy the product via this campaign, as well as through limited-time flavors, social activations, public relations, influencer marketing and retail programs (although as of early March, the company had not yet created plans for any in-store promotions tied directly to the campaign).

SkinnyPop is leveraging media across the entire purchase funnel, Chu notes, from linear and digital TV, to increase awareness all the way down to e-commerce and omnichannel investments to drive real-time purchase. Success will be measured by base velocities in market, along with an in-depth marketing mix measurement to determine overall ROI across channels.

With this being the first campaign for SkinnyPop, Chu says the company wanted to ensure it simplified its product positioning, inviting its fans to find their “Whole Bag Kinda Night” moments. New York-based 360i was the integrated creative and media partner that put the product front and center for this effort.