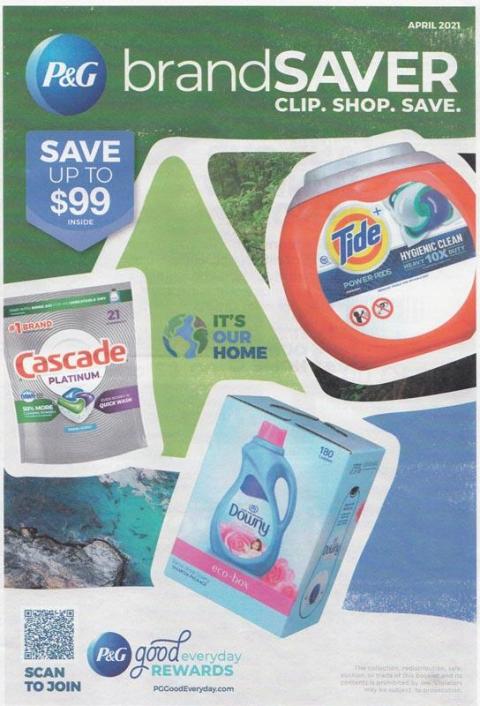 Procter & Gamble tied in to April's designation as "Earth Month" by spotlighting sustainable packaging and its other sustainability initiatives in its latest edition of brandSaver.

Distributed on March 28 via Valassis, the stand-alone insert's front page depicted Tide "Hygienic Clean" pods, Downy fabric softener in an "eco-box," and Cascade Platinum dishwasher detergent pods under an "It's Our Home" message. The cover also boasted of up to $99 in coupons (depending on the market) contained within and depicted a QR code intended to recruit members to its P&G Good Everyday rewards program.

The interior spread continued the "It's Our Home" sustainability theme by communicating "small actions at home can make a world of difference" and highlighting "a few small steps" shoppers can take to help protect, improve and restore the planet. The manufacturer highlighted, for example, that eco-boxes for Gain, Downy, Dreft and Tide use 60% less plastic than traditional packaging, and that doing laundry in cold water conserves energy and reduces carbon emissions, while highlighting that Tide detergents are "formulated for a better clean in cold water." The spread also promised P&G Good Everyday members double points on P&G eco-box, pod or Cascade products.

NOTE: Path to Purchase Institute members can view the full brandSaver article including images and retailer overlays on p2pi.org.