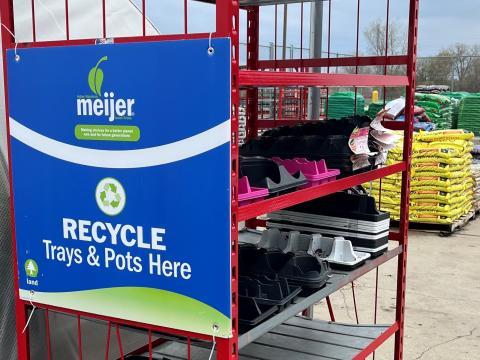 Meijer is encouraging shoppers to bring their plastic flowerpots and trays — regardless of where they originally purchased the plants — to any of the retailer’s Garden Centers to recycle.

Meijer began collecting the plastic containers — which primarily come from its three suppliers of annual flowers — on recycling carts in its Garden Centers in 2014. Since then, the retailer has contributed to the recycling of 1,825 tons of plastic through East Jordan Plastics, a South Haven, Michigan-based plastic processing company, according to a news release.

"At Meijer, we integrate environmental sustainability into our daily operations because it makes good business sense and aligns with our values of caring about the communities we serve," said Jeff Lynch, Garden Center merchant for Meijer, in the release. "Gardening is an activity that supports a natural environment where plants can flourish, but unfortunately, the majority are sold in plastic gardening containers. By working with our suppliers and customers to recycle those containers, it's our way of being more environmentally friendly and moving the industry forward."

Meijer works with three main, Michigan-based local suppliers of its annual flowers: Masterpiece Flower Company in Byron Center, Kalamazoo Flower Group in Kalamazoo and Meadowridge in Zeeland. The suppliers provide Meijer with more than 6.5 million plants each year and work together to consolidate, sort and ship the containers back to East Jordan Plastics, which continues the cycle.

In recent years, Meijer has put forth multiple efforts to reduce plastic waste, including: