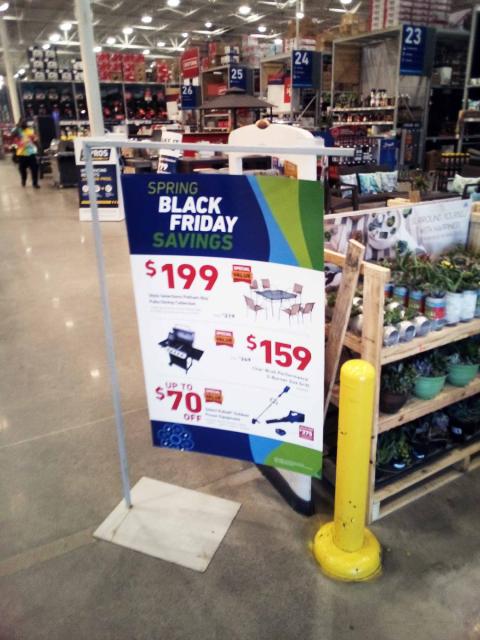 Lowe's walked a fine line between safety and sales this year as it staged its annual "Spring Black Friday" event in the midst of the COVID-19 pandemic.

Explicit Black Friday messaging for the campaign, which ran April 2-15, existed mostly within the home improvement retailer's stores via a hearty signage package.

In contrast, channel rival The Home Depot eliminated its major spring promotions to avoid driving high levels of brick-and-mortar traffic and minimize shopper and employee exposure to the novel coronavirus. Spring Black Friday is a key retailer campaign for both companies.

"While some retailers have taken steps to eliminate value pricing, we recognize the importance of continuing to offer value to our customers in this time of economic uncertainty," Lowe's said in a statement in response to concerns about the appropriateness of the campaign. "Affordability matters now more than ever. We encourage customers to practice safe social distancing and leverage our many fulfillment options."

As in past years, promotional signage was positioned throughout the store to incentivize purchases in multiple categories. The collateral included:

Multiple features in the retailer's April 2 circular supported. Circulars are currently available only in stores – Lowe's stopped posting its circulars online starting with its March 26 edition. The home center chain joins a varied list of retailers that are adjusting their circular activity during the pandemic.

TV spots using the same creative as the in-store materials plugged deals on Samsung and Whirlpool appliances, but the spots did not mention Spring Black Friday by name. Radio spots also did not reference it by name, save for an unrelated spot that ran March 25-27 plugging Greenworks Tools outdoor power equipment.

A "Spring Project Savings" e-commerce page within lowes.com was one of the few digital components that tied in to the campaign. The Institute spotted and captured a related display ad on the lowes.com home page that was removed a few days after the campaign's kickoff.

The campaign launched right after Vermont became the first state to officially ask large retailers such as Lowe's to comply with an order to stop sales of all “non-essential” items to decrease store traffic. Michigan followed suit and went even further to additionally require stores to stop advertising products identified as non-essential, including carpet, flooring, furniture, garden products and paint. A number of local governments have taken similar measures, prompting stores to rope off aisles and bar certain purchases.