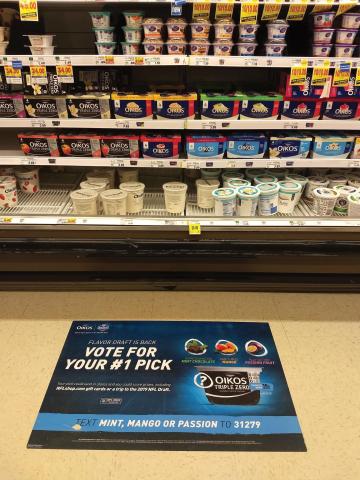 For the second straight year, Danone North America’s Oikos activated its sponsorship of the National Football League Draft with a “Flavor Draft” campaign at Kroger, this time expanding the effort’s footprint by including Midwestern chain Roundy’s.

As it did last year, Oikos conducted consumer research to come up with three new Oikos Triple Zero flavors: mint chocolate, mango and passion fruit. “We actually came up with six top flavors [this year] that are trending not only from a flavor-palate perspective, but also trending with Millennials,” says Tony Fung, Danone’s senior shopper marketing manager – Kroger. The final flavors were selected based on consumer research as well as input from Kroger’s executive team. “We collaborated more on selecting the flavors this year,” Fung says.

The winning flavor rolled out to Kroger stores in April in packaging, communicating the SKU’s exclusivity as the winning flavor of the Flavor Draft. After July, the packaging will change but the flavor will remain exclusive to Kroger.

Due to the success of its first run, this year the program was fully integrated within the Kroger.com experience and ecosystem, which was a “huge win for us,” Fung says. “That is something that we were not able to do in year one. In year two, we kept the same URL and worked with YouTech and 84.51 to have the site integrated within Kroger.com.” Kroger loyalty cardholders who tried to vote or enter the sweeps more than once per day were directed to Oikos e-commerce pages within Kroger’s chain websites.

Similar to last year, Kroger provided Oikos with loyalty data from 84.51 to develop a targeted advertising program, focusing specifically on heavy and light Oikos buyers and shoppers buying in the Greek category. The marketing plan for the Flavor Draft also included:

Oikos also drummed up support for the program among Kroger employees. The brand hosted a lobby event at Kroger’s headquarters encouraging staff to sample this year’s three competing flavors and vote. Since the NFL draft took place in Nashville this year, Oikos also staged a store associate contest in the Nashville market, awarding NFL tickets to the store with the highest sales of Oikos single-serve yogurt.