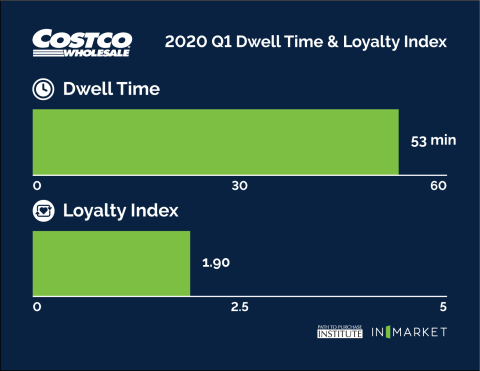 All the top retailers in the U.S. experienced a drop in trip frequency in the first quarter of 2020, as revealed by consumer visitation patterns tracked by location data company InMarket.

The sweeping drop in store visits as compared to the prior quarter came not only due to the lull following a busy holiday season but also as the COVID-19 pandemic kept shoppers at home in March, with most retailers showing the lowest trip frequency since the Path to Purchase Institute began working with InMarket to track the data one year prior.

Kroger’s Harris Teeter was the biggest loser, seeing a .98 drop in its loyalty index, which is measured by the average number of repeat visits an individual shopper made to the store. The average trip frequency for the supermarket banner was 2.65. The Home Depot and Costco both saw their loyalty indexes drop by .92 during the period, taking their frequency to 1.66 and 1.90 respectively.

H-E-B was the most frequently visited retailer during the period, with a loyalty index of 4.17 which was just a .46 decrease from the fourth quarter of 2019. The stability of the Texas supermarket chain may be due to the state’s relatively relaxed lockdown rules, which began on March 19 and started easing in May. H-E-B was one of only three retailers whose loyalty index increased when compared year-over-year to the first quarter of 2019, alongside Walmart and Ace Hardware.

While shoppers were making fewer trips, they were spending significantly longer in many stores. The dwell times, measured by the average amount of time shoppers stay in a store location, increased for many retailers as shoppers stocked up in early March before going on lockdown. The shift in behavior towards fewer, longer trips was particularly obvious for Costco, which led dwell times with shoppers spending an average of 52.79 minutes in stores, an increase of 13.05 minutes over the fourth quarter of 2019. Channel rival Sam’s Club also experienced a huge uptick in dwell time, rising 9.13 minutes to 45.15. The retailer’s loyalty index declined .81 to 1.77 during the period. Warehouse clubs overall fared well in terms of dwell time, as did home improvement stores and consumer electronics retailer Best Buy.

Walmart also saw a significant dwell time rise of 7.47 minutes to 36.8. The mass merchant’s primary brick-and-mortar rival Target was more stable, experiencing a 3.33-minute rise in average dwell time to 36.34 and a .64 decrease in loyalty index to 2.36.

Convenience stores saw significant declines in both metrics as lockdowns kept consumers off the roads, reducing the likelihood that they would stop in for a snack or drink while fueling up. 7-Eleven saw a .37 loyalty index drop to 4.15 and dwell times of 13 minutes, a 3.37-minute decline. Circle K’s trip frequency dropped .31 to 3.44, while dwell time decreased 2.2 minutes to 10.64. Drugstores and dollar stores likewise saw significant declines in both metrics.