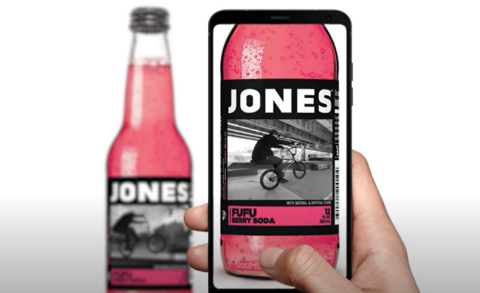 Jones Soda Co. has released a new collection of augmented reality (AR) labels that turn in to short action videos portraying daring athletes, artists and other “masters of their preferred crafts,” according to a news release from the brand. The new animated labels, which appear on 1.5 million bottles of Jones Soda’s five top-selling flavors, arrived on store shelves in the U.S. and Canada in March, marking the brand’s third AR series since last July.

Jones’ AR initiative aims to build on the distinct brand personality the company has established over the last two decades in part by using black-and-white photographs submitted and/or designed by consumers to create a constantly changing series of label visuals. Jones added video to the mix in 2021 with an initial 15-label collection primarily focused on action sports.

A second AR series released months later in October portrayed the animatronic fortune teller machine character Zoltar. (You might remember him from “Big,” the 1988 movie where a Zoltar-type fortune-telling machine turned a child into an adult played by Tom Hanks.) Each AR label had an image of the character plus a Reel Label icon. Once triggered, Zoltar read humorous fortunes customized to incorporate Jones Soda messaging. Consumers could also share a text-based screenshot that replicates one of the fortune cards dispensed by animatronic Zoltar machines.

“Our labels have always been a vital component of our brand DNA, so we’re continually looking for new ways to use them as a canvas to help entertain, retain and expand our fan base,” said Eric Chastain, president of the Jones Soda beverage division, in the release. “Adding video is a logical step at a time when people spend hours on platforms like TikTok. It’s fun, it’s fresh, and it’s bringing new consumers to the Jones app to view the videos as well as check out our photo gallery, submit photos or videos of their own, and shop for their favorite Jones products.”