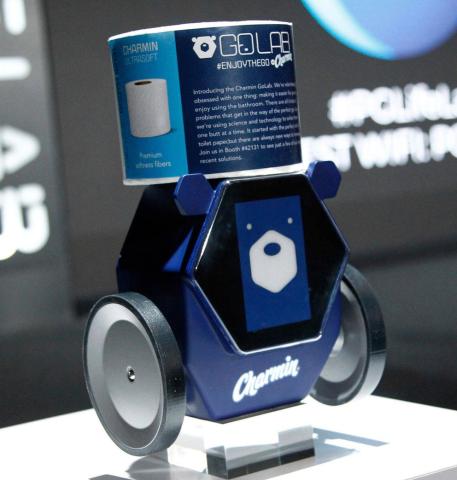 Procter & Gamble’s Charmin has been playing with a robot that delivers a replacement roll of toilet paper to consumers who might be in urgent need of such services. Such is the state of the consumer goods industry these days.

P&G’s fanciful new consumer “solution” made its debut in January at CES, the Consumer Technology Association’s annual showcase for product innovation, which increasingly has become a place for forward-thinking packaged goods brands to be seen alongside the world’s electronics manufacturers.

One week later, the ingenious device (visit P2PI.org to see it in action) was only mentioned in passing at the Big Show, the National Retail Federation’s annual showcase of business innovation. Consumer-engaging robots weren’t as prominent at NRF as they have been in recent years. And the robots that were there performed far more workaday functions like item-sorting and order-picking rather than executing such gimmicky (and, we’re assuming, purely in jest) tasks as P&G’s toilet-side assistance vehicle.

And that was entirely appropriate for this year’s NRF event, at which a very large, extremely energized group of attendees were treated to a wide variety of cutting-edge solutions incorporating the latest and greatest technologies – most of which sought to solve challenges and obstacles that have been hindering effective, profitable retailing for years: on-time fulfillment, shelf maintenance, workforce productivity and shopper analytics, to name some of the more common ones.

The industry has, thankfully, moved past the defensive, reactive posture of recent years and gotten back to a brass-tacks approach to improving their businesses. There seems to be a greater understanding among traditional retailers that, rather than being potential victims of seismic shifts in consumer behavior, advances in technology or the unstoppable onslaught of Amazon, they actually are in control of their own destinies.

Obviously, not every traditional retailer is going to survive the ongoing shift toward omnichannel commerce – especially since “omnichannel commerce” is rapidly evolving into “everywhere commerce,” where the dimensions of a physical store can be sized down to the size of a fitting room, where the fitting room concept can now be simulated on every smartphone, and where purchases can be made literally anywhere – even, ahem, while you’re waiting for the Charmin robot to arrive.

Poorly run retailers will still fail, as they always have, and failure might be faster and easier to achieve these days given the pace of change and the sheer number of purchase options available to consumers. But companies able to employ technology to keep pace with changing consumer behavior and shifting marketplace dynamics can still succeed.

And the same goes for consumer product manufacturers. “Technology is changing every aspect of what the consumer expects,” said Monica Turner, senior vice president-North America at Procter & Gamble, who was at NRF to tout the industry leader’s “High Tech, High Touch” initiative.

Technology is also changing every aspect of P&G’s business – product development, packaging, advertising and retail execution, to name a few – as the company strives to meet those evolving expectations, Turner explained. That makes its attendance at CES just as logical as its attendance at NRF.

So expect to see P&G maintaining its historically strong presence at retail. Just don’t be surprised if the company shows up in your bathroom sometime soon, too.

Peter Breen is editor-in-chief of the Path to Purchase Institute, where he has managed content since its inception in 2003. Before helping to launch the Institute, he spent four years as editor and managing editor of PROMO Magazine and its ancillary products. Read More