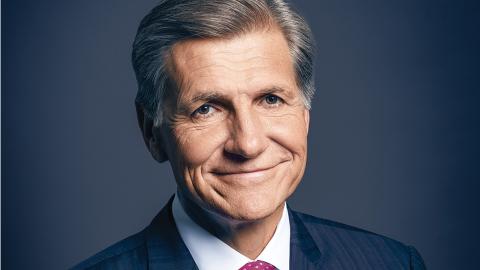 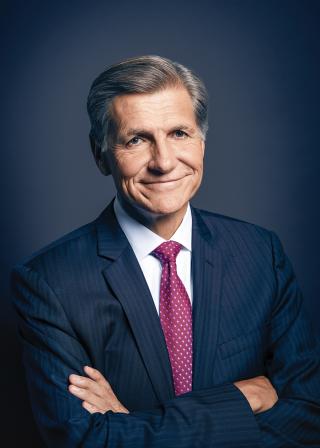 Marc Pritchard’s storied career at Procter & Gamble started when he was fresh out of college. A graduate of Indiana University who studied business and finance, he landed a position as a cost analyst at the CPG giant and says it didn’t take long before he knew it was a good fit.

“I was committed to P&G pretty early,” he says. “After I moved over that two-year mark, I said, ‘This is the place I want to be.’” Pritchard has held 25 positions over the course of his 40-year tenure, including finance, general management, marketing and executive-level positions, culminating — for now anyway — in the position he holds today, chief brand officer.

Pritchard has been named a 2022 inductee into the Path to Purchase Institute Hall of Fame.

Pritchard, who was born in California but calls Colorado his home state, also lived for a few years in Arkansas before his family settled in northern Indiana for his high school years. (His father was in the Navy and eventually landed at Miles Laboratories, with its home office in Elkhart, Indiana.) His first jobs were bussing tables, washing cars and working in mobile home furniture and truck cap factories, since Elkhart is the mobile home capital of the world.

While earning his degree at Indiana University, Pritchard thought he’d work for a couple of years before going back to get a graduate degree — but after landing at P&G, he says the rest is history. He was recruited on-campus by P&G, and left all that behind to do cost analysis in its paper division, focusing on brands such as Charmin, Bounty and Puffs.

Pritchard’s next role took him to the company’s Mehoopany, Pennsylvania, plant where he was the plant accounting manager. “I learned the ropes getting in there at the manufacturing plant,” he says. “It was fantastic training in terms of discipline and thinking.” He then became a forecaster and financial analyst, first in the paper division and later in a corporate role, along the way finding his way to company headquarters in Cincinnati.

It was during his years as a corporate financial analyst working on the health and beauty business for senior management that he was pegged for general management, and then moved into marketing roles to learn another facet of the overall business. He worked on the Sure and Secret brands before assuming roles in hair care and oral care. Later, he was named the general manager for the Olay skincare business.

Pritchard sees his varied resume as a unique benefit of working at P&G all these years. He was given responsibility early — and a lot of it. “There have been so many opportunities and challenges from day one,” he says. “Not a day has gone by that there hasn’t been some new challenge that’s been exciting.”

His success over the years, Pritchard notes, was a combination of hard work and the P&G culture itself. “People here want to create the very best products, do the very best advertising and retail execution with the very best value,” he says. “We’re always striving to do better, to make the lives of the people we serve better.”

Pritchard credits mentors such as Gretchen Price (then-vice president of finance) and Susan Arnold, former vice chair and president, who pushed, challenged and supported him in some of his earlier roles. And later on, he highlights former Chairman and CEO A.G. Lafley and now Executive Chairman of the Board David Taylor, whom he considers not only mentors, but great bosses and partners. Each held him to the highest standards.

But he also learned early on to simply focus on what was in front of him. “I just wanted to do the very best job I could and try to distinguish the contributions I made in any assignment,” he says. “In doing so, I figured that the universe would unfold as it should, so to speak.” That mindset still holds true today, Pritchard says, and it’s the advice he’s always ready to share with others. “Focus on being useful every day,” he says. “If you do that, it will benefit the business you’re working on, the people you’re working with and also you.”

After serving in general management roles, Pritchard then became the vice president for various businesses before assuming global roles as president — ultimately as president of strategy, productivity and growth, in which he focused on company productivity. That was 2006, and Pritchard says five or six years later P&G’s then-CFO (who now serves as CEO) Jon Moeller, declared that the company needed to build its productivity capability and muscle. “It’s been a big part of how we’ve been and are continuing to be successful,” Pritchard says.

Early in his career, the company was questioning its potential for success in the hair care business. Pritchard’s work on a study, in which he collaborated with multiple colleagues at P&G, indicated that the company should take a chance on the business. “The profitability was strong enough for brands to be successful and it really helped going forward,” he says. “I looked at that as a pivotal moment of analysis and strategy in my career, which led to the continuation of our growth in hair care.”

One of the company’s biggest wins at the time was implementing 2-in-1 technology with shampoo and conditioner, first with Pert Plus and then in other brands, cementing its place in the hair care business that continues to be strong to this day.

Another notable accomplishment for Pritchard was in developing the “Easy, Breezy, Beautiful, CoverGirl” campaign. At the time, the cosmetics business was unsteady. “We weren’t doing well from either a profitability standpoint or a growth standpoint,” he says. “But we created that campaign and actually dramatically improved the image and the profitability of the brand.” Even though CoverGirl was acquired by Coty Inc. in 2016, it remained the slogan of the brand until 2017.

Partnerships with people like Queen Latifah — and Queen Collective, a program developed in partnership with P&G and Tribeca Studios that focuses on mentorship, production support and distribution opportunities for multicultural women — were born along with a “new lens into advertising that is more interesting,” Pritchard says.

Pritchard says the company’s work with retailers on advancing retail media, while still in its early days, marks more recent notable achievements. As media becomes an increasingly important part of the retail experience, and as media and commerce continue to come together, P&G will dedicate focus and innovation in this evolving arena.

From livestreaming to connections on Instagram that go directly to purchase and a high degree of retail search, Pritchard looks toward this work with excitement. “We’re proud of that because it’s blending superior communication with superior retail execution in one — and has elevated the importance of that over the course of the last couple of years,” he says.

Pritchard is also passionate about continuing to drive the reinvention efforts in advertising, media and retail. Current efforts include finding ways to achieve mass reach but with greater precision, and using the right data and technology to be able to do programmatic media buying, which is increasingly important for retailers. He points to “LikeAGirl” with the Always brand as an example, as well as Pampers Cruisers 360 and Walmart, in which the company partnered with the retailer to create opportunities to grow the category and grow P&G’s business through retail programs.

Pritchard sees great opportunity in multicultural brand building, digital commerce and sustainability, as well as with never losing sight of ensuring a superior offering that grows the category. For now, though, he finds comfort in the fact that the fundamentals of brand building have stayed the same. “It remains crucial to understand who you are serving, the benefits you’re trying to serve to them with the very best product, package, communication, retail execution and value, and to not let the complexity get to the point where it becomes too complicated.”