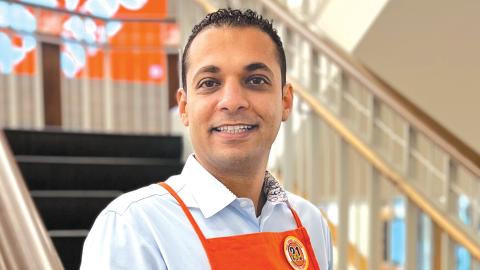 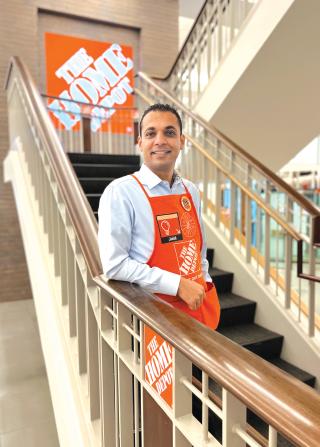 There is a passion in Jalal Hamad’s voice when he speaks — a true appreciation for the work he does and the people around him (his team, associates and customers alike), as well as for the culture and values of The Home Depot. He says he gets his energy from the store. With a humble beginning as a store associate who has risen through the ranks, he has spent his career wearing the bright orange smock the big-box retailer is known for around the world.

Hamad, who assumed the role of senior director, operations, in January, has been named a 2022 inductee into the Path to Purchase Institute Hall of Fame.

A native of Toronto, Hamad was the youngest of five boys to parents who immigrated to Canada in the early 1970s. Both his father and mother worked in leather tanneries and, looking back, he says their dedication to family, a strong work ethic and determination grounded him early in life.

He was a school-loving kid who signed up for every extracurricular activity and was always absorbing as much as he could. He held newspaper routes, worked during the summers at local carnivals and remembers his first “real job” as roasting and bagging pistachios at a roastery. But where he really grew his passion for business was in his oldest brother Zuheir’s computer store.

“I had the opportunity to work alongside him at a really young age,” Hamad says. “I was the only one in my class at school who had a computer at home and I spent an incredible amount of time learning about the business and computers.” The experience taught him about sales, operations, marketing and customer service. “It was incredibly insightful, and I’m forever grateful to my brother, because it really shaped who I was and gave me passion for operating in a retail environment,” he says.

Hamad started his career at The Home Depot when he was just 19 years old. He had watched another one of his older brothers, Jamal, climb the ladder from a paint associate to a store manager. During his first role as an associate in the lightbulb aisle in the electrical department, he knew he was also hooked.

“At that time, The Home Depot was opening a new store every 48 hours across North America,” he says. “There was a lot of opportunity for growth. If you worked hard, believed in yourself and lived by the values of the organization, you would be recognized.”

Hamad had full ownership over the lightbulb bay, and when it went from $800,000 to more than $1 million in sales, he realized he had made an impact. From there, his career advanced pretty quickly. He went from an associate to department supervisor to assistant store manager and then store manager in three years. It was at that time that Paul DeDonato, his first district manager, made a lasting impact on his life. “The courage and insight he had to take a chance on me at 22 years old was incredible,” he says. “I knew then that I could not only do the job, but I had long-term potential within the organization with his guidance and support.”

In mid-2015, Hamad and his family moved to the U.S. and he became the senior director, in-store experience, at the company’s Atlanta headquarters, the post he held until January 2022. Pete Capel, the current vice president of field merchandising for U.S. stores, was instrumental in that move. “He nudged me to seize the opportunity,” Hamad says. “He’s an incredible leader and steward of the organization … who works hard to make sure we never forget who is on the other end of everything we do — the customer and associate.” Chris Duffy, vice president of merchandising, in-store experience, was Hamad’s boss in that role and was “the guy behind the scenes, championing and advocating my progress,” he says. “He taught me how to think about developing myself and others.”

Hamad’s leadership was once again apparent when his team began a large initiative to simplify the in-store experience for Home Depot associates and customers. After discovering the main customer pain points of speed, wayfinding and know-how inside of its stores, the team implemented significant changes, in collaboration with a large cross-functional team from across the organization. With more than 100 different unique experiments/tests, the effort led to the largest in-store investment in the history of the organization.

“This is the first time in 40 years that we have one single brand standard across all of our stores,” he says. “Every store looks the same as it relates to the wayfinding sign package, even though the layouts are slightly different, so customers find a consistent experience from store to store.”

Data and science helped drive the creative, Hamad explains. “Everything, from the colors and icons to the naming conventions on category inserts, was designed from a customer-back approach,” he says. “We wanted to make it easier for our pros and consumers to shop in a way that makes sense to them. It was a huge accomplishment on behalf of the organization and the team.”

Another significant win for Hamad and his team came when COVID-19 closed schools, establishments and restaurants, but not Home Depot stores. His team delivered what he refers to as best-in-class plexiguard shields for its frontline associates who were still going in to work every day and who were shoulder-to-shoulder with customers. The true heroes through it all, he says.

“We designed, developed, implemented and rolled out in under 30 days,” Hamad recalls. With the changing regulations within states, supply chain issues and raw material shortages, the team had to get creative to produce the volume it needed for its stores. “It was an enormous project that was so fulfilling in many ways for the team, because we wanted to do whatever we could to help our associates and customers stay safe,” he says.

Looking at the bigger picture, Hamad says his most important work is perhaps his part in growing and developing future leaders: “To coach, teach and train associates in everything that I’ve had the privilege of learning, and especially how important and incredible our culture is.”

Hamad believes the in-store associate experience will evolve drastically across the industry in the coming years, from how companies operate stores, fulfill customer orders and put product on the shelf to technology’s role and the checkout experience. “I want to be a part of that and alongside our associates as we continue to evolve the in-store model,” he says, adding that his true north star is continuing to develop himself and others to achieve their greatest potential.

But, until then, his mantra is to work smart and have fun while delivering value for the organization. “It’s so important to focus on the job you have,” he says. “Work to gain a deep understanding of the role you’re in and take the time to have an impact on associates, customers and your team.”

He will continue to help the retailer evolve with customers by understanding their ever-changing habits, extracting insights and working toward delivering on company goals and objectives while providing them with a seamless experience, regardless of how they choose to interact — on the phone, on the couch, on the job site or in the store. “It sounds relatively easy on the surface, but there is a lot of work that needs to go into that, and The Home Depot is focused on delivering the very best experience for its customers,” he says.

His advice for others just breaking into the business is this: Always start and end with the associate and customer in mind. “Get a deep understanding of the opportunities and challenges and deliver on them,” he says. “It’s also important to take ownership of your personal growth and development, and be intentional about the things you want to move the needle on. Be sure to build a strong network of people who give you honest feedback and help hold you accountable, and don’t be afraid to get out of your comfort zone.”

Hamad is active outside of work with PAVE, The Planning and Visual Education Partnership that connects students, educators and retailers or other professionals who support retail in a vibrant, meaningful, mentoring format. “I’m passionate about inspiring others, growing and developing talent and future leaders, and really just paying it forward,” he says.

He also sits on the board for StorePoint Retail, serving to connect with new and existing suppliers to offer insight into the minds of retailers. “Developing relationships with our supplier partners is really important,” he says. “We’re not successful as retailers if we don’t have incredible partners who can support us.”