The honey nut-flavored cereal rolled out to all of Giant-Landover's 163 stores across Washington, D.C., Maryland, Virginia and Delaware on Sept. 17 (Ovechkin’s 34th birthday), priced at $2.69 for a 12.25 ounce box. The box is hard to miss as Ovechkin’s infamous toothless smile covers the front below Giant-Landover’s logo. The back of the box communicates special stats and facts.

The SKU was originally available while supplies last but sold out quickly and Giant-Landover announced on Nov. 1 that it would restock the cereal for all of hockey season.

Akin to the famous Wheaties boxes that used to depict former Olympians but with a modern twist, the cereal incorporates social platform Snapchat’s Lens Studio to deliver an interactive, augmented reality-enabled hockey game dubbed “Ovi O’s Slapshot." In the augmented experience, users control an animated Ovechkin and shoot pucks (in this case, honey nut cereal-shaped pucks) at moving targets in a goal for 45 seconds.

To activate, shoppers open Snapchat and point their smart device’s camera at the cereal box, unveiling the virtual hockey arena and goal. Giant-Landover tapped Baltimore-based VR company Balti Virtual to bring the Snapchat experience to life. After playing the game, users can either post their score on social media or reactivate and play again by scanning the box.

Even without access to the actual cereal box, the game can by accessed by scanning an image of the packaging. (See video below.)

A portion of proceeds from the cereal’s sales will benefit Maryland-based nonprofit Children's Cancer Foundation, which fund locally based researchers, programs and facilities to ensure children’s healthy future.

“Giant Food has been a sponsor of the Washington Capitals for over three years, and like all fans, we have enjoyed the spirit and energy [Ovechkin] brings to the game and our local community,” said Ira Kress, interim president of Giant-Landover, in a September media release. “Teaming together for such a fun and healthy product is a win-win for us all. We are proud to offer a delicious breakfast cereal that will also help fund the important work of the Children’s Cancer Foundation.”

Support for the new product spanned multiple circular features including an Oct. 11 full-page ad, a number of social media updates from both Giant-Landover and the Washington Capitals, and a store visit at launch by Ovechkin himself who helped to stock the cereal aisle and work the register for publicity.

NOTE: For more images from Ahold Delhaize chains, visit p2pi.org. Path to Purchase Institute members have access to more than 3,800 images and 630 articles of marketing and merchandising activity at the chains, along with a full Retailer Profile outlining the chain’s operations and strategies. 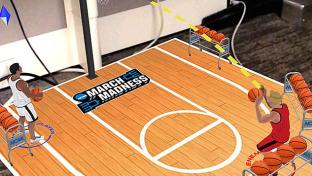 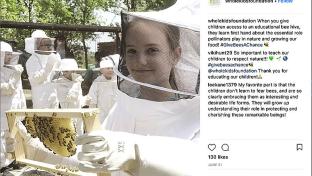 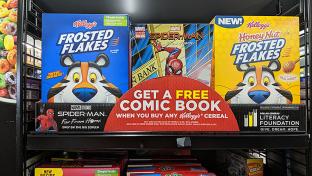 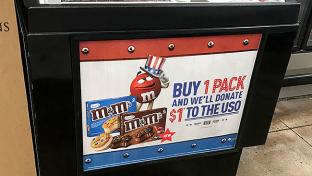