Thanks to one five-week campaign and the muscle of Walmart, more than 78 million meals got delivered to 200 food banks in the Feeding America network last year, marking the largest Feeding America effort to date. The profound social impact was caused by a better and simpler launch of Walmart’s omnichannel brainchild: “Fight Hunger. Spark Change.”

Another difference in 2015 is Walmart decided to focus on Millennials. Research showed that nearly 90% of its Millennial segment had given at least $100 to a nonprofit – which showed a group looking to help. Walmart’s challenge (unlike 2014) was to express that it was easy to help and that the impact would be local.

The campaign rolled out a four-pronged, omnichannel approach. First was traditional media such as co-op TV commercials, radio, a four-page Walmart circular, print ads, digital and banner ads, and an informational YouTube video. Second was a social push, centered on Hispanic Millennial shoppers such as mom blogs, a #WeSparkChange effort that highlighted donations, a Twitter party and mobile ads. The third element was in-store pallet wraps, signage, endcaps, branded packaging, Checkout TV and a pole topper to register a food bank. The final prong was usage of Walmart.com to host a running tally of donations and a way to search by ZIP code meals for local food banks.

In addition to exceeding the goal of 75 million meals delivered, the participating brands exceeded the sales lift goal. 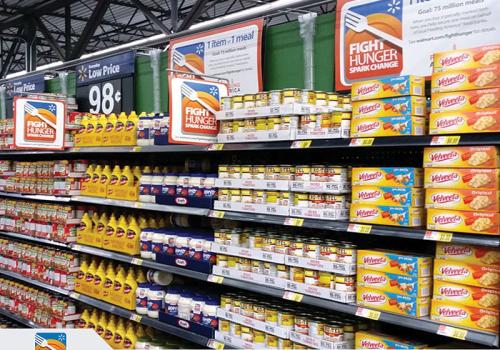 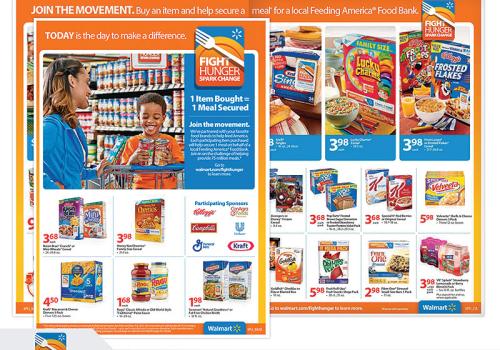 The campaign initially started in 2014 as a way to raise money for a multitude of supplier-owned hunger initiatives, but the effort had a hard time reaching consumers, often confusing them.

In 2015, Walmart simplified the program to focus on one platform: Feeding America. Next, the retailer collaborated with brands to make 240 products available for purchase that would benefit the charity. Lastly, Walmart made action easy: Shoppers buy one product, and one meal gets delivered to a local food bank.

Walmart’s 2015 program was a true three-way partnership between the retailer, the participating brands and the chain’s shoppers. 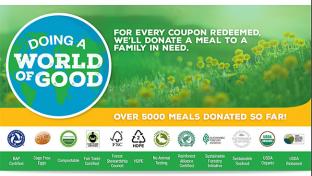