Anheuser-Busch has redirected the money it would normally spend on sports and entertainment events to COVID-19 responses. The company laid out its plan in a #OneTeam spot aired on TV and YouTube.

In a normal year, May would be the start of the summer marketing season. Store aisles would be filled with displays encouraging shoppers to pick up essentials for grilling and Memorial Day gatherings. Gift cards and cakes would be positioned as graduation gifts. Major League Baseball sponsors would connect with shoppers through promotions involving their local teams, while Olympic sponsors would be leveraging buzz for the Summer Games with impressive spectaculars.

Of course, this year is far from normal. March Madness was cancelled, the Tokyo Olympic Games were pushed to 2021, and MLB is looking at playing its entire season in Florida and Arizona. Schools are closed and large parties are currently illegal.

“Anybody who had an Olympic program – all that merchandise is sitting in a warehouse,” says FCB/RED senior vice president-group management director Howard Klein. “And look at big brands like Coke Zero Sugar. March Madness was a big pillar for them. I think brands are [instead] trying to create whatever they can that’s more relevant for the times.”

Meanwhile, many in-store promotions that weren’t based on cancelled seasonal events have also been scrapped because of how retailer operations have changed. “You can’t go into stores and build your displays,” Klein says. “Some stores say, ‘Drop off your stuff at the back door because that’s one less person in the store.’ If the store is actually letting the merchandiser come in, they want you in and out as soon as humanly possible. That’s really affected a lot of things.”

Shoppers also want to spend less time in stores, which have become increasingly stressful environments. “Anybody who had an in-store experience planned like sampling, all those things were cut,” says Heidi Froseth, founder and CEO of Omnicommerce Vanguard. “Not all of those budgets have been reinvested into other experiences. I’m a little concerned about that conservative approach.” 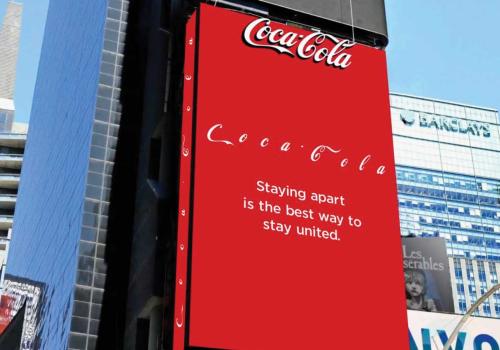 While it normally would have focused heavily on the NCAA Men’s College Basketball Tournament in March, Coca-Cola had greater issues to discuss this year, as the Times Square billboard attests. 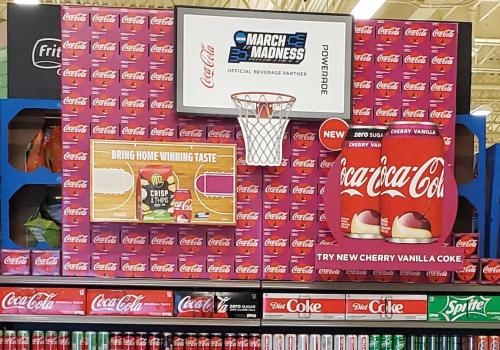 Froseth says that brands should try to meet the moment by pivoting to more relevant content. As an example, she praises General Mills, which has been offering solutions for parents who now have to plan three meals a day. The manufacturer has particularly been promoting its Betty Crocker brand to tap into the increased popularity of baking during the crisis. “CPGs have an opportunity to really ride this wave of in-home consumption, which could mean a banner year,” Froseth says.

Rob Rivenburgh, chief executive, North America, The Mars Agency, says that while programs focused on the Olympics or professional sports had to be scrapped, brands and retailers are pivoting toward cause campaigns and messaging based on togetherness. He sees esports sponsorships as a potential growth area for brands, with the act of watching competitive video games together as a way for dads to connect with kids when all traditional sporting events have been cancelled.

Rivenburgh expects this shift to continue at least until the fall. “It’s going to be slow to see the sports leagues come back, or come back with a crowd,” he says.

Anheuser-Busch has redirected the money it would normally spend on sports and entertainment events to COVID-19 responses. The manufacturer has made a $5 million donation to the American Red Cross, is producing hand sanitizer at some of its manufacturing facilities, and is coordinating with stadiums and arenas to host blood drives. The company laid out its plan in a #OneTeam TV spot that has garnered nearly one million views on YouTube. A-B’s Budweiser has also been using simple displays, digital marketing and social media activity to encourage consumers to share a beer during virtual happy hours.

A-B is a client of FCB/RED, so while Klein admits he’s biased, he says the manufacturer is doing a great job meeting the moment. “You can’t go to a bar and drink, so you’re going to drink at home,” he says. “The approach that they’ve taken has been one of compassion and understanding. We’re all going through the exact same thing together.”

Kimberly-Clark’s Cottonelle addressed the significant product shortages caused by a mix of panic buying and consumers spending all of their bathroom time at home through a “#ShareASquare” campaign. The brand pledged to donate $1 (up to $100,000) to The United Way for every social post made through June 1 using the hashtag that describes how the consumer shared toilet paper with someone in need. Cottonelle also pledged a base $1 million donation to United Way Worldwide’s COVID-19 Community Response and Recovery Fund and will contribute 1 million rolls of toilet paper to the cause this spring. Despite the crisis, “there is no shortage of kindness,” concludes the campaign’s spots. (See page C2.)

“I think that any brands taking social responsibility seriously are being well received,” Boal says.

Many CPGs were already planning for 2021 when COVID-19 reached the U.S., and now all of their future efforts are being called into question. No one knows when social distancing guidelines will ease or what shopping behaviors will look like after an event like this.

“The prevailing view now is that there won’t be a return to full normal,” Boal says. “E-commerce grocery, which was growing, has a new baseline. This is the black swan event e-commerce grocery needed.”

Shoppers concerned about their safety have turned to e-commerce in record numbers, and now that the barriers to entry have been broken down, industry consensus is that at least some of those gains will last beyond the pandemic. Boal says that retailers who were already invested in e-commerce such as Walmart, Ahold Delhaize and Albertsons Cos. are well positioned to take advantage of the trend. He expects click-and-collect services to be even more popular than direct delivery following the crisis, predicting that Dollar General will be a winner in that area because of its high volume of stores (16,368 and counting).

Klein predicts that people will be able to get out again at some point this summer, but that it won’t be until fourth quarter before things really go back to normal. He says brands are starting to discuss how to mark those moments with “welcome back” campaigns. “What has been taken away from you is the opportunity to be in person with people,” he says. “It’s the bonding with people, it’s contact. Once that’s come back, how do brands celebrate that?”

Rivenburgh hopes brands will be back setting up in-store displays by fall, but that new hygiene standards created by the crisis might transform retail. In-store sampling and salad bars may become taboo, and more shoppers might want to use their phones to pay rather than touching shared keypads or screens.

“I think things will be different no matter where we are in the fall,” he says. “The tried-and-true tactics that we’re used to are going to be shaken up. We’re looking at different contingency plans from a timing and marketing mix perspective. We’re planning for various scenarios.”

Which scenario ultimately plays out is still anybody’s guess.