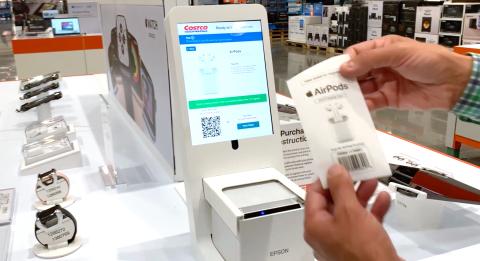 Costco is testing a digital merchandising solution for Apple products at select locations.

The mass merchant is replacing the large corrugate cards representing product not merchandised on the sales floor with a digital kiosk that instead prints tickets or produces digital tickets to present at checkout.

Created by Hayward, CA-based technology and retail display company OnQ, the take-a-ticket kiosk system lets shoppers use a digital screen to select which Apple product they wish to purchase and print a corresponding ticket via a small Epson printer. The system also enables shoppers to scan a QR code to produce a digital ticket instead of printing one. (See video below.)

The kiosk first launched to a Costco store in Redwood City, CA, in December and will roll out to seven additional Costco stores for testing in different regions.

The OnQ solution replaces a system that has long had warehouse clubs representing select SKUs, such as gift cards and big-ticket items, by clunky corrugate "TTR" cards to prevent shrinkage. Consumer electronics manufacturers are among the companies that regularly provide displays at club stores stocking these cards, instead of the physical products, for shoppers to take to checkout where an employee will hand them the item.

The system is an example of COVID-19 accelerating "what should have happened anyway," Paul Chapuis, OnQ founder and chief executive officer, told the Path to Purchase Institute. "We're transitioning from these [larger traditional] take-one cards — that are touched over and over and have to be returned to the display — to a clever interactive display that just allows someone to say, 'I want this product' and just prints out [a] little piece of paper."

The new system was created with security top-of-mind but also comes with environmental benefits. OnQ — which produces everything from security brackets to take-one cards for all the Apple displays in Costco stores across five countries — estimates that using the take-a-ticket system to replace the traditional take-one cards reduces waste by approximately 80%. It also has the potential to significantly reduce cost and carbon footprint by eliminating the shipment of take-one cards to various retailers. A pack of 15 TTR cards weighs 1.5 pounds, and the company ships roughly 5,000 FedEx packages annually to supply and replenish the cards at various retailers.

The system additionally allows brands and retailers to track the number of printed and digital tickets produced and compare that to point-of-sale data for insight into campaign effectiveness.