Despite growing consumer demand, a lack of clear regulation is keeping traditional players out of the market.

Cannabidiol, better known as CBD,has become more mainstream in the past couple of years, swiftly catching the attention of consumers, small brands, and even some traditional consumer packaged goods companies and retailers.

It shouldn’t come as a surprise that CBD has exploded in popularity. More and more consumers are turning to natural alternatives for medicines and opioids, as well as forregular products and foods. Plant-based items are trending. Organic tampons are hitting the shelves. Natural, aluminum-free deodorant is hot. Not to mention, a movement to destigmatize medicinal and recreational cannabis continues to gain momentum as national acceptance widens and more states move toward legalization.

“I think one of the biggest trends that’s actually driving CBD forward is health and wellness,” says Katie Gilsenan, consumer insights manager for the trends and insights team at London-based market research company GlobalWebIndex. “Health nowadays for consumers has become more than just going to the gym. It’s more holistic and includes different wellness activities like meditation and yoga.”

Many have turned to CBD for the perceived health and wellness benefits it delivers. Consumers may use topicals like oils and lotions for external pain, skin care or other ailments. Others take ingestibles like supplements, edibles or infused-beverages for reducing anxiety, improving sleep or a growing number of uses.

It’s important to note, though, that there is currently no scientific evidence that backs up these health claims and, under current law, it is illegal to market CBD as a treatment for any condition/disease or as a dietary supplement. It’s also illegal to put CBD in any foods for people or animals. So far there is only one CBD product approved by the Food and Drug Administration: Epidiolex, which is used to treat very specific childhood epilepsy disorders.

CBD is often associated with anxiety, the most common mental illness in the U.S., which affects 40 million adults every year, according to the Anxiety and Depression Association of America. In a May 2019 GlobalWebIndex survey of U.S. internet users who havetried CBD, 84% said they feel that it’s effective in alleviating symptoms of mental health conditions like anxiety, and approximately 85% believe that it’s effective in alleviating symptoms of physical pain, according to Gilsenan.

So while consumer demand is undoubtedly there, CBD remains a complex issue. There is a vast amount of unverified claims, misinformation and a lack of solid data on how safe and effective CBD is. Plus, the FDA has yet to put forth a clear regulatory framework that would bring more clarity to the market and open the doors for larger, national brands and product manufacturers to have a slice of the CBD-infused pie while it’s hot.

But before getting into all that, it’s important to know what CBD is and where it came from.

CBD is one of the best-known cannabinoids among the more than 100 found in the cannabis plant, along with THC (tetrahydrocannabinol). Hemp-derived CBD, the topic of discussion, is the non-psychoactive compound of the plant. (See Glossary below for an explanation of terms.)

Hemp-derived CBD became federally legal in 2018 with the passage of the Farm Bill, which protected hemp farmers, removed hemp from the definition of marijuana, and most importantly reclassified it as an agricultural commodity – a far stretch from its previous Schedule I controlled substance classification, where it was accompanied by the likes of MDMA (i.e., ecstasy), heroin and fentanyl, to name a few. Marijuana also still remains on that list.

The Farm Bill propelled the hemp-derived CBD market onto its current path, which is expected to lead the U.S. market to $24.3 billion in sales by 2025, according to estimates from Brightfield Group, a consumer insights and market intelligence firm for the CBD and cannabis industries.

However, such projections rely on a couple of things – primarily, the FDA. It’s more a matter of when, not if, the FDA will create a regulatory framework for CBD. At the same time, CBD products are being sold everywhere, often violating current laws. The FDA can’t police every brand on the market, although it did release a consumer update and sent warning letters last November to 15 companies selling CBD products in violation of the Federal Food, Drug & Cosmetic Act (FDCA).

On one hand, the FDA provides fair warnings based on what it knows and doesn’t know. On the other, research cited on the FDA’s website states that negative effects that have been recorded are based on mostly animal studies, not humans. Federal grant work and research are being conducted to determine if CBD can legitimately curb anxiety and be used as an alternative to opioids; other organizations, including The World Health Organization, have said CBD is “generally well tolerated” and has a good safety profile.

Some lawmakers are attempting to make an exception for hemp-derived CBD, like House Agriculture Committee Chairman Collin Peterson (Democrat, Minnesota), whose new, bi-partisan bill HB 5587 would amend the FDCA and explicitly define hemp-derived CBD as a dietary supplement.

For now, there’s a chance that products purchased online or over the counter (depending on who made it) may not carry the amount of CBD stated on the label – or any CBD at all. Given the current state of regulation, they may even contain questionable or harmful ingredients.

And, not surprisingly, consumers tend to be confused about the regulatory landscape. Only 30% of respondents inGlobalWebIndex’s survey consider themselves knowledgeable about how the FDA regulates CBD products, according to Gilsenan.

“It’s really important that any brand operating in this space is transparent and self-regulates to some degree,” Gilsenan says. “Consumers need to know what ingredients are used and that there are no harmful chemicals or toxic residues included.”

As some worry that potentially dangerous actors, or “snake oil” CBD products, are proliferating in the industry, there are many responsible brands that are self-regulating and taking safety measures. Most traditional packaged brands are treading lightly around CBD given the level of regulatory uncertainty, though most analysts believe they are looking into things behind the scenes.

Hemp: type of cannabis plant (defined as cannabis sativa L.) that contains less than 0.3% THC, meaning no intoxicating properties, and is high in CBD. Legal at the federal level.

Marijuana:type of cannabis plant (defined as cannabis sativa and cannabis indica) that usually contains more than 10% THC, is low in CBD and produces a “high.” Deemed a Schedule 1 controlled drug and illegal at the federal level.

“It’s mainly the smaller, independent, more niche brands that are operating and kind of owning this space instead of the large well-known players,” Gilsenan says. They have less to lose, less scrutiny hanging over them, she notes.

In Path to Purchase IQ’s latest Trends Report, 26.4% of the consumer goods marketing professionals surveyed identified CBD as the “least valuable” topic of interest to their organization in 2020 among 13 identified topics, while only 7.6% viewed it as “most valuable.” (See chart below.)

For the same reasons as traditional brands, top retailers are also approaching CBD with caution. Retailers such as CVS Pharmacy, Albertsons Cos., 7-Eleven, Southeastern Grocers, Petco, Sephora, Ulta, Kroger and Walmart are only stocking topicals. However, edibles or CBD-infused beverages, still illegal, can be found in some stores, mostly small, independent retailers.

For the time being, traditional brands and retailers can closely watch what these small players are doing. One hemp and CBD company taking consumer safety and transparency seriously since its inception in 2012 is Colorado-based Bluebird Botanicals. The Certified B Corp. was the third company to start selling CBD products in the U.S. and the first to sell them globally. Bluebird avoids making unverified health claims and invests heavily in sourcing, gaining third-party authentication when possible, and making that information accessible to consumers through a database of ingredient information for each item.

While transparency can play a key role, marketing in this space brings its own challenges, requiring brands to get creative. Virginia Lee, CBD research manager at Brightfield Group, offered up a number of CBD brands doing interesting things, including:

• HempFusion in November launched a month-long North American campaign including ads in more than 50 major airports and a smart CBD vending machine dispensing the company’s Stress product at Hartsfield-Jackson Atlanta airport (the busiest in North America) to target “the busy and affluent traveler” during the holiday season.

• Feals and CBDMD have used radio and podcast ads. 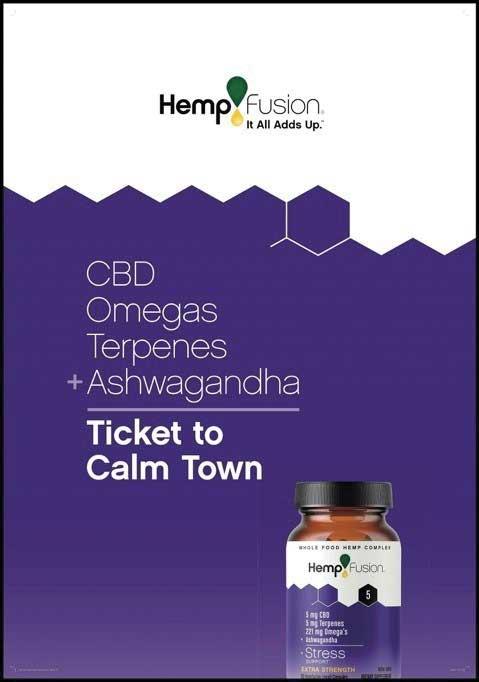 Marketing in this space is still very new and, like CBD itself, poses a lot of hurdles, particularly online and through social media. It’s tougher for startups to invest the time, money and energy in the necessary quality assurance that more-established players such as Bluebird Botanicals can.

Who might have such resources when the FDA and government agencies get their act together on regulations and laws? The big, traditional CPG companies.

In fact, some big-name brands have publicly played with the idea of incorporating CBD into their businesses. Mondelez International CEO Dirk Van de Put told CNBC in a May 2019 interview that the manufacturer is considering adding CBD-infused snacks to its product line. “Yes, we’re getting ready, but we obviously want to stay within what is legal and play it the right way,” Van de Put said.

Particularly eager is Unilever’s Ben & Jerry’s, which actually announced last May its commitment to including CBD in its ice cream innovations and will release CBD-infused products once the FDA acts. The company even noted that Ben & Jerry’s had its eye on sustainably sourced CBD from Vermont.

Among less patient participants, Michael Dykes, the president and CEO of the International Dairy Foods Association, reportedly told reporters in January at the trade group’s annual conference in Arizona that the “tremendous consumer demand” for CBD might push companies in dairy to roll out CBD-infused food and beverages with or without the regulatory framework. “[The] industry is moving and saying, ‘Look, we’re going to be careful with the claims we make, and yes we’re going to take some risk,’” he said.

PepsiCo has also reportedly expressed interest in CBD partnerships or equity stakes, as well as in cannabis, which has actually garnered more support from big companies than CBD.

For instance, alcohol giant Constellation Brands has made three investments into Canadian-based cannabis company Canopy Growth (which has recently hit hard times despite a number of celebrity investors) since 2017, and now has a 37% equity stake in the company.

Other big names that have been making moves into cannabis include booze makers Molson Coors, Heineken and Diageo.

Coca-Cola, on the other hand, is staying on the sidelines, revealing that it has looked at the cannabis industry and currently has no intention of seeking a partner or creating its own items.

So while it’s unclear what exactly the future holds, it is clear that CBD products will be part of it. 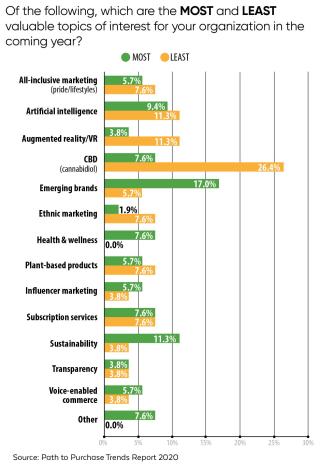