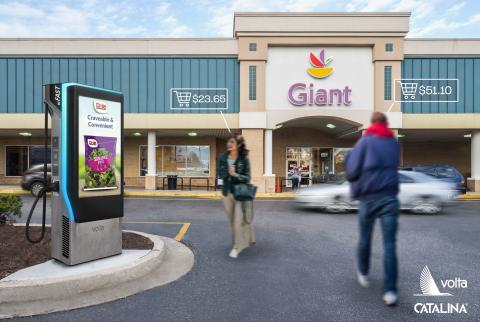 Volta operates a nationwide network of EV chargers that incorporate large-format digital displays that double as a digital out-of-home (DOOH) advertising opportunity. Its growing network currently creates more than 900 million monthly impressions via more than 4,600 digital ad screens in 39 designated market areas (DMAs) across 26 states, according to a news release.

Volta installs these location-based media stations in high-traffic retail locations, including Walgreens and Ahold Delhaize, both of which are part of Catalina's extensive retailer network, as well as Amazon Fresh, Tanger Outlets, Albertsons Cos. and Whole Foods Market locations. Volta partners with advertisers to sponsor the service.

Catalina's measurement services will give Volta the ability to directly determine incremental sales lift at the store level for retailers and brands that run campaigns on its ad platform. This detailed view into how the Volta Media Network increases shoppers' spend provides a critical understanding of the impact DOOH advertising has on conversions, equipping advertisers with data that informs effective media strategies, according to the release.

"With their focus on sustainability and ability to communicate with shoppers literally steps away from the point of purchase, Volta brings a unique inventory source to Catalina's place-based media offering and we've already begun to see clients like Dole lean in to," said Tiffany Southwell, vice president of out-of-home media at Catalina, in the release.

A recent example of a brand tapping into the partnership is a campaign that was jointly executed with Dole Foods. According to the release, Dole wanted to drive incremental sales lift and grow category share during a key selling season. The CPG brand deployed an eye-catching marketing creative showcasing multiple Dole products via Volta Media screens near entrances of specific grocery locations. Catalina's measurement capabilities revealed that the campaign delivered an 8% sales lift and increased category share by 8.5%.

"The concise and point-blank delivery of data to spotlight sales conversions and buyer response further simplified the out-of-home metrics and underscored the value Volta Media provides," said Kellee Miller, director of shopper marketing at Dole Food Company, in the release.

Catalina helped outline the impact of Volta's media for another recent campaign, this time for a fast-casual restaurant whose products are also sold in stores, per the release. As a result of the prominent marketing messages displayed across Volta's media screens, the brand achieved a 15% sales lift with an incremental ROAS 29% higher than Catalina's average for out-of-home media campaigns.