Amazon is continually adjusting its winning Prime strategy to keep its value proposition attractive as buying habits continue to evolve.

Despite a recent suggestion by a Morgan Stanley survey that Prime membership may have reached its penetration limits among American shoppers, Amazon is investing heavily in growing the loyalty program, especially as competition heats up in the grocery e-commerce arena.

Amazon is adding more local food stores to its Prime Now delivery service as a way to grow grocery share in urban markets.

Despite taking a huge leap of its own into groceries with the acquisition of Whole Foods Market, Amazon also has stuck to its strategy of partnering with stores (and restaurants) to offer up their wares for one- and two-hour delivery via Prime Now in some of the 30 U.S. cities that currently host the service.

For example, Sprouts Farmers Market confirmed plans to expand its relationship with Prime Now to 20 stores by year end, while Fresh Thyme Farmers Market in the last six months added grocery delivery via Prime Now in the Indianapolis and Chicago markets. Chicago also offers delivery of goods from local outposts such as Plum Market and Eataly, while in New York, the service includes retailers such as Gourmet Garage, Westside Market, Union Square Wine & Spirits and Billy's Bakery. In Seattle, shoppers have access to PCC Natural Markets, Bartell Drugs and All The Best Pet Care, among others. 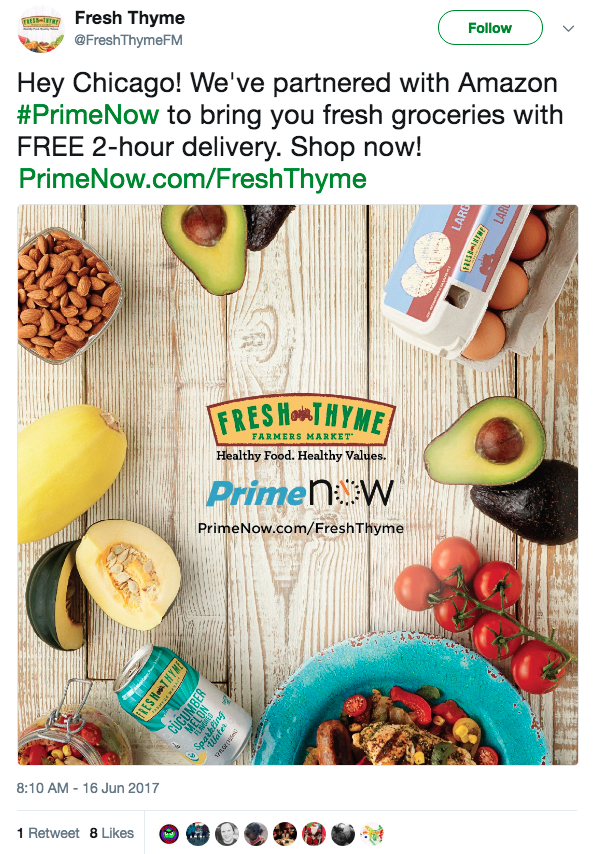 When Amazon first announced that Prime Now would offer delivery from local partner stores in 2015, some retailers rightfully hesitated to hand over control of their shoppers' experience and relationship to the e-commerce giant. Today, third-party delivery services have proliferated at a rapid pace and shopper expectations have grown in kind. Retailers may be more willing to take the risks that come with the benefit of a sophisticated e-commerce delivery system that would expand their reach — especially regional businesses that may not have the ability to buy one for themselves a la Target when it announced its Shipt deal.

The retailer also has inked a partnership with Simply Recipes owner Fexy Media to add shoppable recipes that can be ordered via Prime Now.

Meanwhile, Amazon also is tweaking the program's fee structure, recently eliminating a $20 minimum purchase requirement for free two-hour delivery in select cities including New York, while raising the fee for orders under $35 in other areas. (It also raised its Prime Now restaurant delivery fee from $1 to $3.99.)

It additionally is worth noting that Prime Now users enjoy the benefit of being able to place orders for last-minute holiday gifts up until 9:30 p.m. and get them delivered before midnight. For free. This year, for the first time, the qualifying products include Amazon Handmade items from local artisans.

The retailer also continues investing in its broader Prime loyalty program, recently growing the availability of free same-day and one-day delivery to members in thousands more cities and towns now totaling more than 8,000.

Another recent move expanded the retailer's sample box program to let members order single samples of a product for between $2 and $4 that participants get back as a credit for a future purchase of the full-sized item. The program includes food and beverages as well as sports nutrition, beauty products and personal care items. 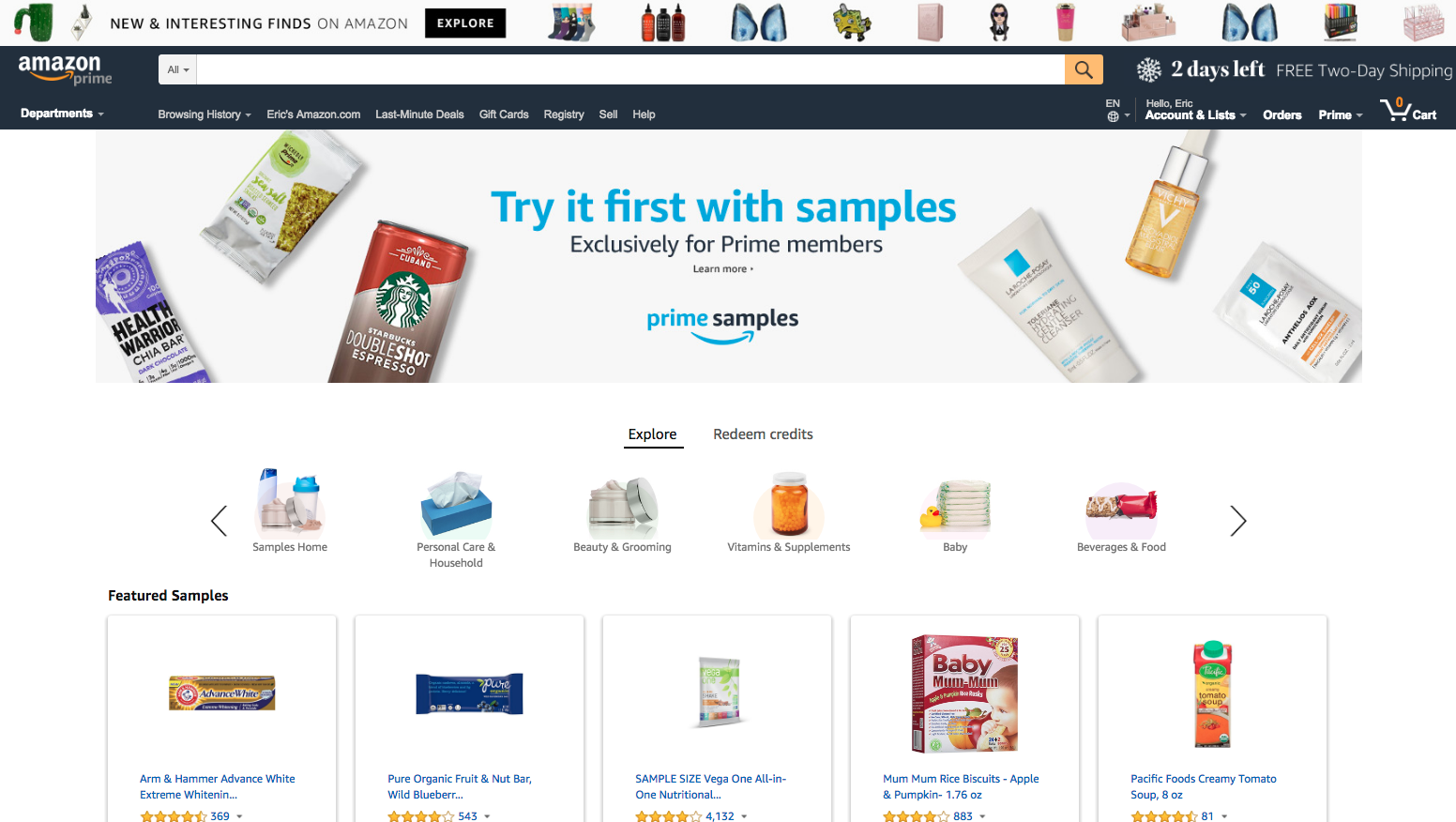 On the back end, Amazon is aiming to increase the packaged grocery selection on its main website by lowering the commissions it charges select sellers that meet its criteria.

The retailer also is nurturing future memberships, for the first time letting teens use the Amazon mobile application to shop or stream content independently while giving their parents the power to customize the level of autonomy.

On some fronts, Amazon is pulling back. The company cut back its AmazonFresh grocery delivery service in at least nine states, according to reports. The retailer also is shutting down its five-year-old Amazon Wine marketplace at year end, noting that wine will continue to be offered through AmazonFresh, Prime Now and Whole Foods Market.

Despite the cutbacks, not everyone is convinced Prime membership is stagnating. According to data from Minneapolis-based market research firm Magid, the Prime program is still in its early adoption cycle, as 58% of older millennials have a Prime account whereas 31% of Boomers have one. Magid's senior vice president of retail Matt Sargent does not anticipate Prime growth will slow until the penetration rates are equal across age segments.

“Amazon continues to be the go-to place for shoppers, regardless of age or income: Nearly nine in 10 consumers have purchased from Amazon in the past 12 months, with nearly half being Prime members,” Sargent told Progressive Grocer. “Consumers are driven to Amazon thanks to free shipping and competitive pricing, along with the wide selection of products available.

“Currently, overall Amazon usage ranges from 89% with older Millennials to 79% with Boomers," Sargent said. "The fact that all age groups currently use Amazon, whether it is through Prime or not, suggests there is a big enough market among consumers. While the overall-market Amazon users have likely topped out, Prime membership (and increased engagement with Amazon) is likely to continue to grow.” 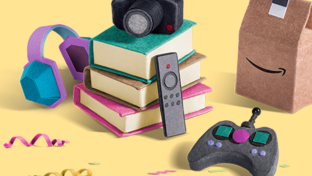 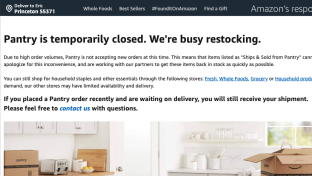 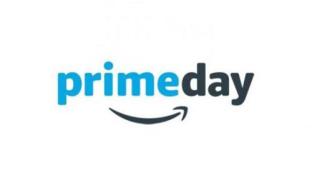