Albertsons Cos. bulked up its annual Monopoly game with more prizes and savings offers, an online-only sweepstakes as well as new features for the dedicated mobile application it introduced last year.

The game ran from Feb. 7 to May 9 at all of the retailer’s chains (aside from Haggen) and awarded over $250 million in prizes and discounts, up from last year’s $200 million. As always, the goal of the collect-and-win game was to match a set of properties on a Monopoly game board acquired at checkout by collecting game tickets (individual affix-and-win markers) awarded with in-store purchases of participating brands. Private label brands such as O Organics as well as national brands from Procter & Gamble, Hershey Co., Dr Pepper Snapple Group, Tyson Foods, PepsiCo/Frito-Lay and other manufacturers were eligible.

Notably new this year was a code scanning function for the “Shop, Play, Win!” standalone app that enabled participants to enter by scanning a barcode on the back of the ticket rather than manually entering a 16-digit code (though that was still an option via a dedicated website or the app). This also allowed participants to track game markers and tokens as well as determine which ones were still needed to win.

Although the added features were intended to facilitate faster results and a better user experience, consumers still needed to keep the physical markers to redeem prizes. 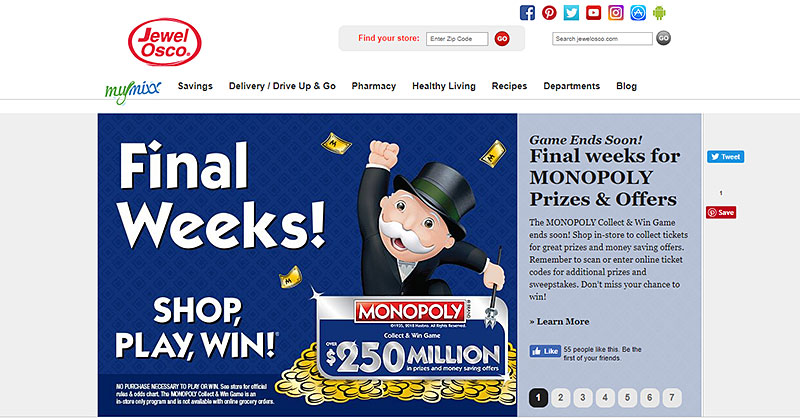 The main Monopoly game primarily awards (most participants win nothing) gift cards, free grocery items and small cash prizes. If no one wins the $1 million grand prize, Albertsons offers a “last chance” drawing, which was for $500,000 in the past, but grew to $1 million this year.

Some new prizes and discounts this year included nba.com coupons, coupons ranging in value from 50 cents to $5 with an average of 55 cents, 10 cents off per gallon gas rewards in select markets, and promotional codes for Universal, DreamWorks or Illumination merchandise or movies.

Some coupon codes awarded consumers with Fandango or Universal Studios tokens, which could be used to enter a sweeps (identified below) or redeemed for rewards specified on the Fandango Redemption page or the Universal Redemption page on shopplaywin.com; 270 million online coupon codes contained a code valid for a Fandango token, while 130 million contained valid codes for Universal tokens. Drawing dates and number of tokens required to enter each sweeps varied. Prizes included:

Other sweeps included in this year’s game were random drawings for "Second Chance" prizes that include a new car, college tuition and $10,000, iHeartRadio music experience prizes and last year’s auto-replenishing Progressive Jackpot.

Albertsons has staged the promotion, licensed from Hasbro Inc.’s Monopoly board game, since 2009.