Activation: AFM promoted avocado use during March through a Coupons.com offer, a promotional website, in-store displays and a partnership with Bimbo Bakeries.

With its “Fanwich” program, Avocados From Mexico (AFM) tries to grow avocado use in handheld meals such as sandwiches, tacos, burritos, burgers and wraps. According to a 2015 AFM study, guacamole is the No. 1 way in which avocados are consumed in the U.S. (by 77% of the avocado eaters surveyed), followed by salads (64%), tacos/burritos (58%), sandwiches (56%), burgers (48%) and wraps (40%).

“Our target market is sports fans and hosts of game-day parties beyond the Big Game,” says Stephanie Bazan, AFM market development director. “Our objective with this shopper marketing program is to drive consumer consumption post [Super Bowl], when it peaks. … We leverage the excitement of basketball, specifically the college playoffs that occur in March, to help bring focus on one of the top avocado usage occasions.”

Bazan says that AFM focused on the pre-shop this year by partnering with Quotient Technology’s Coupons.com to offer consumers 75 cents off the purchase of two AFM avocados from Feb. 13 to March 26.

“Our goal is to make it on the shopping list,” Bazan says.

For the second consecutive year, the Fanwich experience expanded to the Hispanic market via a partnership with bread maker Bimbo Bakeries USA. Consumers could save $1 with the purchase of two AFM avocados and any one Bimbo Bakeries product from March 1 to March 26. Co-branded bins in produce sections plugged the offer.

The overall campaign was touted via in-store radio and online sandwich recipes at Fanwich.com. Bazan says success of the program would be measured through final volume data during the promotional period as well as prints and redemption of its savings offers.

Bimbo Bakeries hopes to expand the partnership in the future, Lambert says. 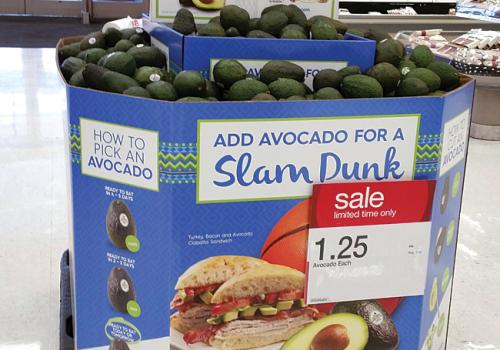