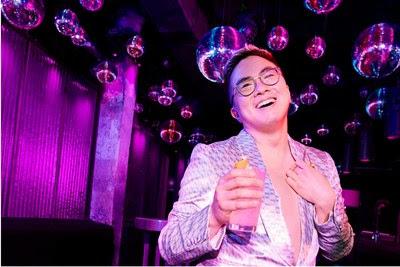 Pernod Ricard’s Absolut is doubling down on its support for the LGBTQ+ community with the launch of “Out & Open,” the vodka brand’s digital campaign that pays homage to LGBTQ bars and restaurants and the ways these spaces serve the community.

Launched ahead of June's Pride Month, the ongoing initiative has tapped public figures such as actor and comedian Bowen Yang to highlight the impact of LGBTQ bars and restaurants as well as bring awareness to the struggles the marginalized community faces by partnering with the National LGBT Chamber of Commerce (NGLCC). The partners have made a significant contribution toward succession planning education for these establishments and other LGBTQ-owned businesses.

"The Absolut Out & Open platform conveys our more than forty years of allyship and ongoing support of LGBTQ bars and restaurants, as we understand the poignant role these spaces play within the community," said Pam Forbus, senior vice president, chief marketing officer, Pernod Ricard North America, in a news release. "Our goal with Out & Open is to bring attention to these critical LGBTQ spaces, leveraging powerful voices within the community, like Bowen Yang, to illustrate how important it is that they remain open for the future generation to safely gather and celebrate."

Out & Open also addresses and brings awareness to recent studies that show LGBTQ bar listings have been on the decline. According to research from sociologist and author Greggor Mattson, Ph.D and cited by Absolut,LGBTQ bar listings have declined by 15.1% between 2019 and spring 2021, on the heels of a 14.4% decline between 2017 and 2019. While these bar closures have been exacerbated by the pandemic, several factors have driven this steady decline, including gentrification, technology and a lack of the succession planning that prevents these spaces from staying out and open for the next generation, according to Absolut’s release.

Out & Open recently launched as a digital space and audio-visual series, led by photographer Bronson Farr, within Absolut.com. The digital hub spotlights personal stories from members of the LGBTQ community, from well-known singers and musicians to a queer minister and New York writer, to highlight the role that LGBTQ bars have played, and continue to play, in their lives. These stories recall the happy and emotional memories of what it was like to first enter a LGBTQ bar, pay homage to those that have closed and share how they have been spaces for social justice.

In a "love letter" on the Out & Open webpage to beloved New York City LGBTQ bar Eastern Bloc, Yang summarizes it as, "LGBTQ bars are monuments to our past, venues for the present, and gateways to our future."

For every listen of an Out & Open story on Absolut.com/us/out-and-open between April 25 and June 30, Absolut will increase its $175,000 donation to the NGLCC by an additional $1 to fund succession planning education and training, up to a maximum of $200,000.

Absolut’s partnership with the NGLCC aims to make the organization's training programs around succession planning more accessible to more LGBTQ business owners. The succession trainings, hosted by NGLCC subject matter experts, will take place in cities such as Minneapolis, New Orleans and Denver as well as virtually.

Absolut's long-standing support of the LGBTQ community is perhaps most visible through its annual Pride Month bottle, which has featured Gilbert Baker's iconic rainbow flag since 2008 and just released its new packaging design. The Absolut rainbow bottle serves as a “physical reminder of the brand's belief that a colorful, diverse and equal world is something to strive and work toward,” per the release. The rainbow flag represents the range of voices that make up the LGBTQ community, like the Out & Open campaign.